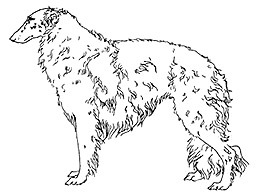 A coursing hound which must be courageous, powerful, and of great speed.

Head long, lean and in proportion to dog's size and substance. In bitches, head finer than in dogs. Well filled in below eyes. Measurement equal from occiput to inner corner of the eye and from inner corner of eye to tip of nose. Skull very slightly domed and narrow, stop imperceptible. Head fine so that bones and principal veins can be clearly seen. Viewed from side, forehead and upper line of muzzle form an almost straight, slightly convex line. Jaws long, deep and powerful; nose large and black, nicely rounded, neither cornered nor sharp. Viewed from above, the skull should look narrow, converging very gradually to tip of nose. Occipital process very accentuated.

Dark with intelligent, keen and alert expression. Almond shaped, set obliquely and placed well back but not too wide apart. Eye rims dark. Eyes not light, round, bulbous or staring.

Small, pointed and delicate. Set high but not too far apart. Nearly touching at occiput; when in repose, folded back along neck. Should be active and responsive; may be erect when alert, tips sometimes falling over.

Slightly arched; reasonably long and well muscled. Free from throatiness, flattened laterally, set at an angle of 50-60 degrees to the longitudinal axis of the body.

Shoulders clean, sloping well back. Muscular but not loaded. Fine at withers but not accentuated. Forelegs clean and straight. Seen from front, narrow like blades; from side, wider at elbows, narrowing down to foot. Elbows directed backwards, turning neither in nor out. Pasterns slightly sloping, strong and flexible. Length of forearm nearly equal to half total height at withers.

Chest, ribs of narrow oval cut, great depth of brisket, reaching to elbows, giving great heart and lung room, especially in mature dogs. Breastbone slightly pronounced with adequate width between elbows, and abdomen very tucked up. Back rather bony, muscular and free from any cavity, rising in a graceful curve with well balanced fallaway. Highest point of curve is situated over last rib. Curve is more pronounced in dogs than bitches. Loins broad and very powerful with plenty of muscular development. Fallaway long and well muscled. Width between hip bones at least 8 cm (3 ins.).

Long, rather low set; when measured between thighs reaches up to top of nearest hip bone. Well feathered, carried low in a graceful curve. From level of the hocks, may be sabre- or slightly sickle-shaped but not ringed.. In action, not rising above level of back.

Front, straight with long reach, pasterns springy. Hind, straight with powerful, driving hocks; moving wider than front. Viewed from side, appearance in action should be that of effortless power.

Silky, flat, wavy or rather curly (but never woolly). Short and smooth on head, ears and front of legs; much longer on body with heavy feathering on backs of legs and hindquarters, tail and chest. Neck carries a large, curly frill; more profuse in dogs than bitches.

Any colour acceptable, with the exception of merle.

Any departure from the foregoing should be considered a fault and the seriousness with which the fault should be regarded should be in exact proportion to its degree and its effect upon the health and welfare of the dog.