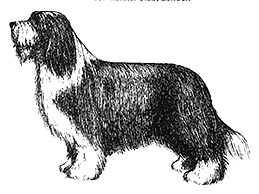 A lean active dog, longer than it is high in an approximate proportion of 5-4, measured from point of chest to point of buttock. Bitches may be slightly longer. The breed, though strongly made, should show plenty of daylight under the body and should not look too heavy. A bright, enquiring expression is a distinctive feature of the breed.

The Bearded Collie should be alert, lively, self confident and active.

The temperament should be that of a steady intelligent working dog, with no signs of nervousness or aggression

The head should be in proportion to the size of the dog. The skull broad and flat and square, the distance between stop and occiput being equal to the width between the orifices of the ears. The muzzle strong and equal in length to the distance from the stop to the occiput, the whole effect being that of a dog with strength of muzzle and plenty of brain room. The stop should be moderate. The nose large and square, generally black but normally following the coat colour in blues and browns. The nose and lips should be of solid colour without spots or patches. Pigmentation of lips and eye rims should follow nose colour.

The eyes should tone with coat in colour, be set widely apart and be large, soft and affectionate, but not protruding. The eyebrows arched up and forward but not so long as to obscure the eyes.

The ears of medium size and drooping. When the dog is alert, the ears should lift at the base level with, but not above, the top of the skull, increasing the apparent breadth of the skull.

The teeth large and white, the incisors of the lower jaw fitting tightly behind those of the upper jaw. However, a pincer bite is acceptable.

The shoulders should slope well back; a line drawn through the centre of the shoulder blade should form a right angle (90 degrees) with the humerus. The shoulder blades at the withers should be separated only by the vertebrae but should slope outwards from there sufficiently to accommodate the desired spring of rib. Legs straight and vertical, with good bone, and covered with shaggy hair all round. Pasterns flexible without weakness.

The length of the back should come from the length of the ribcage and not that of the loin. The back level and ribs well sprung but not barrelled. The loins should be strong and the chest deep, giving plenty of heart and lung room.

Well muscled with good second thighs, well bent stifles and low hocks. The lower leg should fall at a right angle to the ground and, in normal stance, should be just behind a line vertically below the point of the buttock.

Oval in shape with the soles well padded. The toes arched and close together, well covered with hair including the pads.

Set low, without kink or twist, and long enough for the end of the bone to reach at least the point of the hock. Carried low with an upward swirl at the tip whilst standing or walking, but may be extended at speed. Never carried over the back. Covered with abundant hair.

Movement should be supple, smooth and long reaching, covering the ground with the minimum of effort.

Double with the undercoat soft, furry and close. Outercoat flat, harsh, strong and shaggy, free from woolliness and curl, though a slight wave is permissible. Length and density of the hair should be sufficient to provide a protective coat and to enhance the shape of the dog, but not enough to obscure the natural lines of the body. The coat must not be trimmed in any way. On the head, the bridge of the nose should be sparsely covered with hair which is slightly longer on the sides just to cover the lips. From the cheeks, the lower lips and under the chin, the coat should increase in length towards the chest, forming the typical beard.

Slate grey, reddish fawn, black, blue, all shades of grey, brown and sandy, with or without white markings. Where white occurs, it should only appear on the foreface, as a blaze on the skull, on the tip of the tail, on the chest, legs and feet and, if round the collar, the roots of the white hair should not extend behind the shoulder. White should not appear above the hocks on the outside of the hind legs. Slight tan markings are acceptable on the eyebrows, inside the ears, on the cheeks, under the root of the tail, and on the legs where white joins the main colour.

Ideal height at the shoulder:
Dogs 53-56 cms (21-22 ins)
Bitches 51-53 cms (20-21 ins)
Overall quality and proportions should be considered before size but excessive variation from the ideal height should be discouraged.