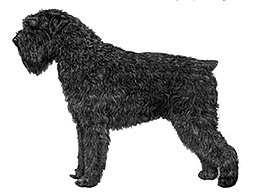 Sub-brachymorphic. Short and compact body, strong and well-muscled limbs. The Bouvier des Flandres gives the impression of power, but without clumsiness. The Bouvier des Flandres is to be judged in its natural stance, without physical contact with the handler. Important proportions: " Length of body from the point of shoulder to point of buttock should be approximately equal to the height at withers. " Proportions of length of skull to length of muzzle are 3 as to 2.

Originally the Bouvier des Flandres was used as a herding dog, as a draught dog and as a churning dog. The modernisation of farm equipment has affected these first tasks and nowadays the Bouvier des Flandres is above all used as a guard dog for the estate and the farm, as a defence and police dog. Its physical and behavioural aptitudes, its great qualities of scent, initiative and intelligence warrant its use as a tracking dog, a messenger dog and a gamekeeper's dog.

The head has a massive appearance, still more accentuated by the beard and moustache. It is in proportion to the body and stature. Its clean-cut lines are obvious to the touch.
Skull: Well developed and flat, slightly less broad than long. Toplines of skull and muzzle are parallel. Frontal groove hardly denoted.
Stop: Only slightly pronounced, more apparent than real, due to upstanding eyebrows.
Muzzle: Broad, powerful, well-boned, straight in its upper line, narrowing towards the nose, but never becoming pointed. Its length should be shorter than the skull by 2 to 3. Circumference measured just below the eyes should be approximately equal to length of head.
Nose: Nose continues the muzzle in a line, which is slightly convex towards its end. It must be well-developed, rounded at the sides and always black in colour. Wide open nostrils.
Lips: Well fitting and strongly pigmented.
Cheeks: Flat and clean, zygomatic arches are not very protruding.
Jaws: Jaws must be powerful and of equal length.

Frank and energetic expression, neither protruding nor sunken. They should be slightly oval in shape, set horizontally. Colour should be as dark as possible in relation to coat. Light and wild looking eyes should be strongly penalised. Lids black without the slightest indication of unpigmented areas. Haw should never be visible

Set high, above eye level, flaps falling vertically. The fold must not stand higher than the top of the skull. Shape and carriage: Semi long, forming an equilateral triangular, slightly rounded at the tip, lying flat against the cheeks, except the slight lift-up at the top of the ear set, neither folded or nor curled, in proportion with head size, covered with very short hair.

Teeth are strong, healthy, white and evenly set. Scissor or pincer bite. Dentition must be complete.

Should spring cleanly from the shoulders and is carried sufficiently upright. Strong, well muscled, widening gradually towards the shoulders. Length slightly shorter than the length of the head. Nape powerful and slightly arched. No dewlap.

The front legs have strong bone and are well muscled. They are perfectly straight and parallel when seen from the front.
Shoulders: Relatively long, muscled, without being heavy and moderately oblique. The shoulder blade and humerus are approximately of the same length.
Upper arm: Moderately oblique
Elbows: Close to the body and parallel. Elbows that turn in or out in a natural stance or on the move are considered a fault.
Forearm: Whether seen in profile or from the front, they must be perfectly straight, parallel to each other and perpendicular to the ground. They must be well muscled and with good bone. Wrist (carpus): Exactly in line with the forearm. Only the pisiform bone juts out at the back of the wrist. Strong bone.
Front pasterns (metacarpus): Strong bone, quite short, sloping forward very slightly.

Powerful, close-coupled and short.
Chest: Broad and well let down as far as the level of the elbows, but not cylindrical. The first ribs are slightly arched, the others rounded and well-sloped to the rear, giving the desired length of chest. Flat ribs are to be severely penalised. The distance from the point of the breastbone (manubrium) to the last rib must be considerable, about 7/10 of the height at the withers.
Topline: Upper line of back and loins horizontal and tight and firm.
Withers: Slightly raised.
Back: Short, broad, muscled and well supported, with no sign of weakness, yet remaining flexible.
Loins: Short, broad and well muscled. Must be flexible, with no sign of weakness.
Croup: Must follow as closely as possible the horizontal line of the back and blend imperceptibly into the curve of the buttocks. Broad but not excessively so in males, more developed in bitches. A croup which falls away or a goose rump is a serious fault.
Underline: The underside of the chest rises very slightly towards the belly, which is only slightly tucked up. Flanks must be short, especially in males.

Strong, with pronounced muscle, upright and perfectly parallel when seen from the rear. Must move in the same planes as the front legs.
Upper thighs: Broad, well muscled and parallel in direction to the median plane of the body. Femur must be neither too straight nor too sloping. Buttocks well let down, trousered and firm. Stifle: Set approximately on an imaginary straight line from the highest point of the hip (iliac crest) perpendicular to the ground.
Lower thighs: Moderately long, well muscled, neither too straight nor too sloping.
Hocks: Rather close to the ground, broad and tight. Seen from behind they should be straight and perfectly parallel when standing. On the move they should turn neither in nor out.
Rear pasterns (metatarsus): Strong and lean, rather cylindrical and perpendicular to the ground when the dog is in a natural standing position. No dewclaws.

The coat is very abundant, the outercoat forming with the dense undercoat a protective layer perfectly adapted to the sudden climatic changes in this breed's native land. The hair must be coarse to the touch, dry and matt, neither too long nor too short (about 6 cm), slightly tousled but never woolly or curly. Shorter on the head and very short on the outside of the ears. The inner part of the ear flap is protected by medium long hair. The upper lip carries a moustache and the chin a full beard giving the forbidding expression so typical of this breed. The eyebrows consist of raised hairs, accentuating the shape of the superciliary ridges without ever veiling the eyes. The coat is particularly harsh and rasping on the upper part of the back. It shortens very slightly on the limbs but remains harsh. A flat coat should be avoided because it lacks undercoat. The undercoat is padding made up of fine dense hair, which grows beneath the outer coat and together with the topcoat it forms a waterproof covering.

The Bouvier des Flandres coat is usually grey, brindle or overlaid with black. A completely uniform black is also accepted without being favoured. Light coloured, so-called washed-out coats are not acceptable. A white star on the chest is tolerated.

DISQUALIFYING FAULTS
Overly shy or dangerously aggressive dog.
Obvious lack of type.
Unpigmented nose of any colour other than black.
Pointed muzzle.
Pronounced over or undershot bite.
Any missing teeth other than one P1.
Wall eyes or wild expression.
Entropion, ectropion, unpigmented eyelids.
Coat chocolate brown, white, pepper and salt, washed out colour and any other pale fawn going from light to red, even with black overlay.
Height at withers outside the range of the standard.