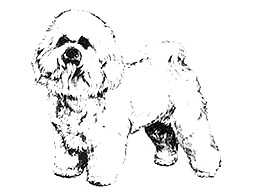 Lively little dog, with eyes alert and full of expression.

The skull longer than the muzzle, the whole head in balance with the body. The muzzle should not be thick or heavy; nor should it be snipy; the cheeks flat and not very strongly muscled; the stop should be slight and the hollow between the eyebrows just visible. Skull flat when touched, although the hair tends to make it look round. The nose should be round, black, soft and shiny. The lips should be fine, fairly tight and completely black, drooping just sufficiently for the lower lips to be covered by the upper, but never heavy nor hanging. The lower lip should be neither heavy, protruding nor flabby and should never show the mucous membrane when the mouth is closed.

Dark, with dark eye-rims, fairly round, never almond shaped not obliquely set; lively, not too big; never showing any white. Neither large nor prominent. The socket should not be pronounced.

Narrow and delicate. Hanging close to the head and well covered with tightly curled, long hair. Carried forward when the dog is alert but in such manner that the forward edge touches the skull and not carried obliquely away from the head. The leather should reach halfway along the muzzle.

Scissor bite, that is to say, the incisors of the lower jaw should be placed immediately behind and in contact with those of the upper jaw.

Fairly long, carried high and proudly. Round and slim near the head, gradually broadening to fit smoothly into the shoulders. Length about one third the length of the body (proportions of 33cm - 11cm for a dog of 27 cm high at the withers).

Normally carried raised and curled gracefully over the back but never tightly curled. It should not be docked and should not touch the backbone but the hair should always fall on to the back. Slightly low set.

Fine, silky, with soft corkscrew curls. Neither flat nor corded, and measuring 7-10 cm in length. The dog may be presented untrimmed or have muzzle and feet slightly tidied up. [In Australia the coat is usually trimmed to reveal the natural outline of the body. It is rounded off from any direction and never cut so short as to create an overly trimmed or squared off appearance.]

Pure white. Under the white coat dark pigment is preferred. Black, blue or beige markings are often found on the skin.

Any departure from the foregoing points should be considered a fault and the seriousness of the fault should be in exact proportion to its degree and its effect upon the health and welfare of the dog.