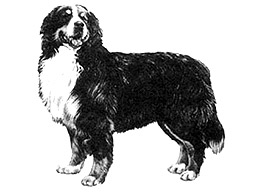 The Bernese Mountain Dog is a farm dog of ancestral origin which was used as a guard and draught dog and for driving cattle in the prealpine regions and in the midland areas around Bern. Originally he was named “Dürrbächler” according to the name of the hamlet and of the inn of Dürrbach, near Riggisberg in the Canton Bern where these long-haired tricoloured
farm dogs were especially numerous. In 1902, 1904 and 1907 specimen of this breed had already been exhibited at dog shows, and in 1907 some breeders of the region of Burgdorf decided to promote the pure breeding of these dogs by founding the “Schweizerischer Dürrbach-Klub”, and fixing the characteristic traits of the breed. In 1910, at a show in Burgdorf where many farmers of that region brought their Dürrbächler dogs to, already 107 specimen were shown.

Self-confident, attentive, vigilant, fearless in every day situations; good-natured and devoted to his own people, self-assured and placid towards strangers ; of medium temperament, docile.

HEAD : Strong. In size balanced to general appearance, not too massive.

CRANIAL REGION :
Skull : Viewed from the front and in profile little rounded. Frontal furrow hardly marked.
Stop : Well defined, but without being too pronounced.

Dark brown, almond-shaped, with close fitting eyelids. Neither too deep-set nor prominent. Loose eyelids are faulty.

Medium-sized, set high, triangular in shape, slightly rounded at the tips, in repose hanging flat and close to the head. When alert, the rear part of the set-on is raised while the front edge of the ear remains close to the head.

General appearance : Forelegs seen from the front straight and parallel, standing rather wide apart.
Shoulders : Shoulder blade long, strong and well laid back, forming a not too obtuse angle with the upper arm, well attached to the chest, well muscled.
Upper arm : Long, set oblique.
Elbows : Close fitting; neither turned in nor out.
Forearm : Strong, straight.
Pastern : Seen from the side almost upright, firm; seen from the front in straight line with the forearm.

Topline : From the neck running slightly downwards to the withers in a harmonious line, then running on straight and level.
Back : Firm, straight and level.
Loins : Broad and strong; seen from above slightly less broad than the chest.
Croup : Smoothly rounded.
Chest : Broad and deep, reaching to the elbows; forechest distinctly developed; ribcage of wide-oval section extending as well back as possible.
Underline/belly : Slightly rising from chest to hindquarters.

General appearance : Seen from the rear straight and parallel, not too close.
Upper thigh : Long, broad, strong and well muscled.
Stifle : Distinctly well bent.
Lower thigh : Long and oblique.
Hock joint : Strong, well angulated.
Metatarsus : Set almost vertically. Dewclaws to be removed (except in those countries where it is prohibited by law).

Forefeet : Short, roundish; with well-knit, well-arched toes. Turned neither in nor out.

Hind feet : Slightly less arched than forefeet, turned neither in nor out.

Bushy, reaching at least to the hocks; hanging straight down when at rest; carried level with back or slightly above when moving.

Sound and balanced movement in all gaits covering a lot of ground; free stride reaching well out in front, with good drive from behind; at the trot, coming and going, legs moving forward in a straight line.

Jet black main colour with rich tan markings on the cheeks, above the eyes, on all four legs and on the chest, and with
white markings as follows :

Any departure from the foregoing points should be considered a fault and the seriousness with which the fault should be
regarded should be in exact proportion to its degree and its effect upon the health and welfare of the dog.

· Unsure behaviour.
· Fine bones.
· Irregular set of the incisors provided that the bite remains correct.
· Absence of any other theeth than 2 PM1 (premolars 1); the M3 (molars 3) are not taken into consideration.

· Male animals should have two apparently normal testicles fully descended into the scrotum.
· Only functionally and clinically healthy dogs, with breed typical conformation should be used for breeding.