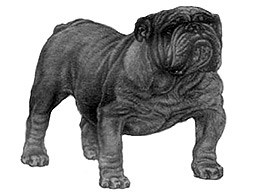 In forming a judgement on any specimen of the breed, the general appearance, which is the first impression the dog makes as a whole on the eye of the judge, should be first considered. Secondly should be noticed is its size, shape and make, or rather its proportions in the relation they bear to each other. No point should be so much in excess of the others as to destroy the general symmetry, or make the dog appear deformed, or interfere with its powers of motion, etc. Thirdly, its style, carriage, gait, temper and its several points should be considered separately in detail, due allowance being made for the bitch, which is not as grand or as well developed as the dog.

The general appearance of the Bulldog is that of a smooth-coated thickset dog, rather low in stature, but broad, powerful and compact. The head is fairly large in proportion to the dog’s size. The face is relatively short. The muzzle broad, blunt and moderately inclined upwards. The body short and well knit, the limbs stout and muscular. The hindquarters high and strong but rather lightly made in comparison with its heavily made foreparts. The dog should convey an impression of determination, strength and activity, similar to that suggested by the appearance of a thick-set Ayrshire bull.

(See under General Appearance and Gait/Movement)

Should convey an impression of determination.

The skull relatively large in circumference. Viewed from the front it should appear high from the corner of the lower jaw to the apex of the skull, and also broad and square. The cheeks should be well rounded and extend sideways beyond the eyes.

Viewed from the side the head should appear very high, and moderately short from its back to the point of nose. The forehead should be flat, neither prominent nor overhanging the face; the skin upon it and about the head slightly loose and finely wrinkled without excess, neither prominent nor overhanging face. From the “stop” a furrow should extend up to the middle of the skull, being traceable to the apex. The face measured from the front of the cheek bone to the nose should relatively short and its skin may be slightly wrinkled. The muzzle should be short, broad, turned upwards and deep from the corner of the eye to the corner of the mouth. The nose should be large, broad and black, and under no circumstances should it be liver coloured, red or brown; The distance between the inner corner of the eye (or from the centre of the stop between the eyes) to the extreme tip of the nose should not be less than the length of the tip of the nose to the edge of the under lip. The nostrils should be large, wide, open and black, with a well-defined vertical straight line between them. The flews, called the “chop” should be thick, broad, pendant, and deep, covering the lower jaws at the sides They should join the underlip in front and quite cover the teeth. The jaws should be broad, strong and square, the lower jaw should project slightly in front of the upper with moderate turn up.

Over the nose wrinkle, if present, whole or broken, must never adversely affect or obscure eyes or nose. Pinched nostrils and heavy over nose roll are unacceptable and should be heavily penalised.

Viewed from the front, the various properties of the face must be equally balanced on either side of an imaginary line down the centre of the face.

The eyes seen from the front, should be situated low down in the skull, well away from the ears. The eyes and “stop” should be in the same straight line, which should be at right angles to the furrow. They should be wide apart, provided their outer corners are within the outlines of the cheeks. They should be quite round in shape, of moderate size, neither sunken nor prominent, and the colour should be very dark – almost, if not quite, black – showing no white when looking directly forward. Free from obvious eye problems.

The ears should be set high on the head - i.e. the front inner edge of each ear should (as viewed from the front) join the outline of the skull at the top corner of such outline, so as to place them as wide apart, and as high and as far from the eyes as possible. In size, they should be small and thin, the shape termed "rose ear" is correct, and folds inwards at its back, the upper or front edge curving over outwards and backwards, showing part of the inside of the burr.

The jaw should be broad and square and have the six small front teeth between the canines in an even row. The canine teeth or tusks wide apart. The teeth should not be seen when the mouth is closed. The teeth should be large and strong. When viewed from the front, the underjaw should be centrally under the upper jaw to which it should also be parallel.

Moderate in length thick, deep and strong. It should be well arched at the back, with some loose, skin about the throat, forming a slight dewlap on each side.

The shoulders should be broad, sloping and deep, very powerful and muscular, and giving the appearance of having been "tacked on" to the body. The brisket should be capacious, round and deep from the top of the shoulders to the lowest part where it joins the chest and be well let down between forelegs. It should be large in diameter and round behind the forelegs (not flat-sided, the ribs being well rounded). The forelegs should be very stout and strong, set wide apart, thick, muscular and straight, with well-developed forearms, presenting a rather bowed outline, but the bones of the legs should be large and straight, not bandy or curved. They should be short in proportion to the hind-legs, but not so short as to make the back appear long, or detract from the dog's activity, and so cripple him. The elbows should be low and stand well away from the ribs. The pasterns should be short, straight and strong.

The chest should be wide, prominent, and deep, The body should be well ribbed up behind, with the belly tucked up and not pendulous. The back should be short and strong, broad at the shoulders. There should be a slight fall to the back close behind the shoulders (its lowest part), whence the spine should rise to the loins (the top of which should be higher than the top of the shoulders), thence curving again more suddenly to the tail, forming a slight  arch - a distinctive characteristic of the breed - termed "roach back".

The legs should be large and muscular, and slightly longer in proportion than the forelegs, so as to elevate the loins. The hocks should be slightly bent and well let down, so as to be long and muscular from the loins to the point of the hock. The lower part of the leg should be short, straight and strong. The stifles should be round and turned slightly outwards away from the body. The hocks are thereby made to approach each other, and the hind feet to turn outwards.

The tail, termed the "stern", should be set on low, jut out rather straight, then turn downwards. It should be round, smooth and devoid of fringe or coarse hair. It should be moderate in length - rather short than long - thick at the root and tapering quickly to a fine point. It should have a downward carriage (not having a decided curve at the end), and the dog should not be able to raise it over its back. Lack of tail inverted, or extremely tight tails are undesirable.

From its formation the dog has a peculiar heavy and constrained gait, appearing to walk with short, quick steps on the tips of its toes, its hindfeet not being lifted high, but appearing to skim the ground, and running with the right shoulder rather advanced, similar to the manner of horse in cantering.

Should be fine in texture, short, close and smooth (hard only from the shortness and closeness, not wiry).

The colour should be whole or smut (that is, a whole colour with a black mask or muzzle). The only colours (which should be brilliant and pure of their sort) are whole colours - viz., brindles, reds, with their varieties, fawns, fallows etc., white and also pied (i.e. a combination of white with any other of the foregoing colours). Dudley, black and black with tan are extremely undesirable colours.