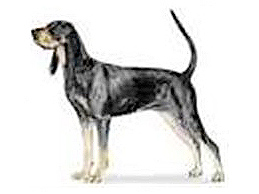 The Black and Tan Coonhound is first and fundamentally a working dog, a trail and tree hound, capable of withstanding the rigors of winter, the heat of summer , and the difficult terrain over which he is called upon to work. Used principally f or trailing and treeing raccoon, the Black and Tan Coonhound runs his game entirely by scent. The characteristics and courage of the Coonhound also make him proficient on the hunt f or deer , bear , mountain lion and other big game. Judges are asked to place great emphasis upon these f acts when evaluating the merits of the dog. The general impression is that of power , agility and alertness. He immediately impresses one with his ability to cover the ground with powerful rhythmic strides.

Proportion-Measured f rom the point of shoulder to the buttocks and from withers to ground the length of body is equal to or slightly greater than the height of the dog at the withers. Height is in proportion to general conformation so that dog appears neither leggy nor close to the ground.

Substance-Considering their job as a hunting dog, the individual should exhibit moderate bone and good muscle tone. Males are heavier in bone and muscle tone than females.

Even temperament, outgoing and friendly. A s a working scent hound, must be able to work in close contact with other hounds. Some may be reserved but never shy or vicious. Aggression toward people or other dogs is most undesirable.

The head is cleanly modelled. From the back of the skull to the nose the head measures from 9 to 10 inches in males and from 8 to 9 inches in f emales. Expression is alert, f riendly and eager. The skin is devoid of f olds. Nostrils well open and always black. The flews are well developed with typical hound appearance. Penalise excessive wrinkles.
Skull tends toward oval outline.

Medium stop occurring midway between occiput bone and nose. Viewed from prof ile the line of the skull is on a practically parallel plane to the f oreface or muzzle.

Eyes are from hazel to dark brown in colour, almost round and not deeply set. Penalize yellow or light eyes.

The neck is muscular, sloping, medium length. The skin is devoid of excess dewlap.

Powerfully constructed shoulders. The forelegs are straight, with elbows turning neither in nor out; pasterns strong and erect.

The back is level, powerful and strong. The dog possesses full, round, well sprung ribs, avoiding flat sidedness.
Chest reaches at least to the elbows.

Quarters are well boned and muscled. From hip to hock long and sinewy, hock to pad short and strong. Stifles and hocks well bent and not inclining either in or out. When standing on a level surface, the hind feet are set back from under the body and the leg from pad to hock is at right angles to the ground.
Fault- Rear dewclaws.

The tail is strong, with base slightly below level of backline, carried free and when in action at approximately right angle to back.

When viewed from the side, the stride of the Black and Tan Coonhound is easy and graceful with plenty of reach in front and drive behind. When viewed from the front the forelegs, which are in line with the width of the body, move forward in an effortless manner, but never cross. Viewed from the rear the hocks follow on a line with the forelegs, being neither too widely nor too closely spaced, and as the speed of the trot increases the feet tend to converge toward a centre line or single track indicating soundness, balance and stamina. When in action, his head and tail carriage is proud and alert; the topline remains level.

The coat is short but dense to withstand rough going.

Faults- White on chest or other parts of body is highly undesirable, and a solid patch of white which extends more than one inch in any direction is a disqualification.

Size measured at the shoulder -
Males 25 to 27 inches;
Females 23 to 25 inches.
Oversized dogs should not be penalized when general soundness and proportion are in favour. Penalize undersize.

DISQUALIFICATION
Solid patch of white which extends more than one inch in any direction.

In as much as this is a hunting breed, scars from honourable wounds shall not be considered  faults.