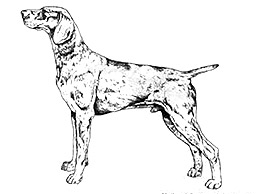 Adopted in Australia May 1996

Lean, well defined, neither too light nor too heavy; as to strength and length it matches the substance and the sex of the dog.
Skull: Moderately wide, flatly rounded, scarcely pronounced occipital bone, front furrow not too deep, noticeably developed superciliary ridges.
Stop: Moderately developed

Foreface
Nose: Somewhat protruding. Nostrils sufficiently wide, broad and mobile. Basically brown, however black in black or black roan dogs. A flesh-coloured or spotted nose is only permissible in dogs with white as a basic colour.
Muzzle: Long, broad, deep and strong in order to enable the dog's correct carrying of game. Viewed from the side the nasal bridge shows a slight curvature in all transitions from a nobly constructed ram's nose to a slight rise above the straight line, more prominent in the males. A totally straight nasal bridge, although still acceptable, is less attractive; a concave bridge (dish-face) is a serious fault.
Flews: Tight fitting, not too pendulous, good pigmentation. The naso-labial line slopes almost vertically and then continues in a flat arch to the moderately pronounced corner of the lips.
Cheeks: Strong, well muscled.

Moderately long, set on high and broad, flat and without twisting hanging down close to the head, bluntly rounded at the tip. Neither too fleshy nor too thin. When brought forward they should reach to approximately the corner of the lips.

Strong jaws with a perfect, regular scissor bite. The upper incisors should reach over the lower incisors without a gap and the teeth should be positioned vertically in the jaws. 42 sound teeth, in accordance with the teeth formula.

Length in harmony with the general appearance of the dog, progressively thickening towards the body. Very muscular and slightly crested nape. Tight fitting skin of throat.

General appearance: Viewed from the front, straight and parallel; viewed from the side, the legs are well placed under the body.
Shoulders: Shoulder blades well laid back, well attached to chest, and strongly muscled. Shoulder blade and upper arm well angulated.
Upper arm: As long as possible, well muscled and dry.
Elbow: Close but not too tight to body, neither turned in or out, well set back.
Forearm: Straight and sufficiently muscled. Strong bone, not too coarse.
Pastern joint: Strong
Pastern: Minimal angulation of pastern and forearm, never standing upright.

Topline: Straight and slightly sloping.
Withers: Well defined
Back: Firm and muscular. Vertebral processes should be covered by muscles.
Loin: Short, broad, muscular, straight or slightly arched. Transition from back to loin tight and well knit.
Croup: Broad and long enough, not abruptly slanting, but slightly slanting towards the tail, well muscled.
Chest: Somewhat deeper than broad with well defined forechest, with the sternum reaching back as far as possible. Sternum and elbow joint on the same level. Ribs well sprung, neither flat nor barrel-shaped. False ribs reaching well down.
Underline: With elegant arch, slightly tucked up towards rear, dry.

Round to spoon shaped, with well tight and adequately arched toes. Strong toenails. Tough, resistant pads. Feet set parallel, neither turned in nor out, in stance as well as movement.

Set high, strong at the root and then tapering, of medium length. About halfway docked for hunting purposes. At rest hanging down; in movement horizontal, neither carried too high above the backline nor extremely bent. (In countries where the tail docking is prohibited by law, the tail can remain in its natural shape. It should reach as far as the hocks and be carried straight or slightly sabre tail fashion).

Well extended strides, with forceful propulsion from the hindquarters and adequate reach of the forelimbs. Front and hind legs moving straight and parallel. The dog is carrying himself in a proud attitude. Pacing gait is not desirable.

Skin: Close and tight, not wrinkly.
Texture: Short and dense, rough and hard to the touch. Somewhat thinner and shorter on the head and ears, not remarkably longer at the underside of the tail. Should cover the whole body.

Solid brown, without markings.
Brown with small white or flecked markings at chest and legs.
Dark brown roan, with brown head, brown patches or specks. The basic colour of such a dog is not brown mixed with white or white with brown, but the coat shows such an even intensive mixture of brown and white which results in that kind of inconspicuous exterior of the dog ever so valuable for the practical hunt. At the inner sides of the hindlegs as well as the tip of the tail the colour is often lighter.
Light brown roan with brown head, brown patches, specks or without patches. In this colouring the brown hairs are fewer, the white hairs are predominant.
White with brown head markings, brown patches or specks.
Black colour in the same nuances as the brown, respectively the brown roan colours.
Yellow tan markings are permissible.
Blaze, fleck and speckles flews are permissible.

Any departure from the foregoing points should be considered a fault and the seriousness with which the fault should be regarded should be in exact proportion to its degree and its effect upon the health and welfare of the dog, and on the dog’s ability to perform its traditional work.

Faults in attitude, not according or typical to gender.
Muzzle too short
Flews too heavy or too thin
From the total of 4 PM 1 and 2 m3 only two teeth may be missing.
Eyes too light. Yellowish, bird of prey eyes.
Ears too long, too short, too heavy, set on too narrow or twisted.
Loose skin at throat.
Slight roach back.
Rump (croup) too short.
Chest too deep.
Tail strongly bent or carried too high above the topline.
Elbows turned in or out. Feet turned in or out. Forelegs standing close or wide.
Hindquarters too straight.
Slightly bow-legged, slightly cow-hocked or close hocks.

SERIOUS FAULTS
Clumsy, lymphatic, coarse conformation.
Marked stop.
Flesh-coloured or flecked nose (except when basic colour of coat is white).Snipy muzzle, concave bridge of the nose (dishface).
Pincer bite or partial pincer bite.
Distinct roach back, slight swayback.
Considerable lack in depth of chest. Poorly developed forechest. Ribs too flat or barrel shaped.
Distinctly turned in or out elbows.
Weak and down on pasterns.
Pastern totally vertical
Distinctly cow-hocked or bow-legged, in stance as well as in movement.
Overbuilt hindquarters.
Flat feet.
Spread toes.
Clumsy gait.
Deviation of more than 2 cm from the given height at the withers.

DISQUALIFYING FAULTS
Distinctly non-typical gender characteristics.
Absence of more than 2 teeth from the total of 4 PM1 and 2M3. Absence of 1 tooth or more other than PM1 and M3.
Non visible teeth have to be considered as missing.
Overshot or undershot bite, wry mouth as well as all intergrades.
Any surplus teeth arranged outside the dental arch.
Cleft palate and hare lip.
Excessively loose eyelids, ectropian, entropian, distichiasis (double row of eyelashes).
Excessive swayback, malformation of the spine.
Any malformation of the chest, e.g. clipped sternum (short sternum blending abruptly into the abdominal line).
Rear dewclaws with or without bony skeleton.
Weak character.