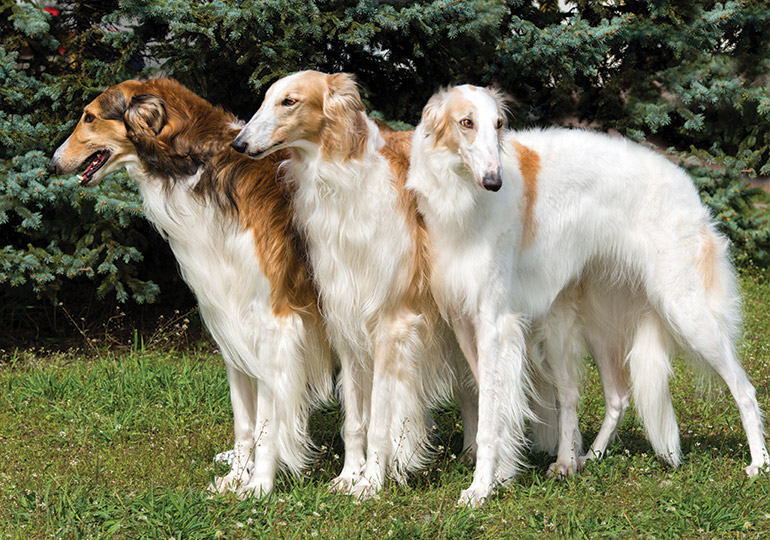 Borzoi have been an integral part of Russian national culture and history for nine centuries. The Russian nobility bred and hunted wolf, fox, hare and sable with them. Often a particular aristocratic family’s Borzoi could be distinguished by their distinctive colour, markings and head shape.

From the time of the first Tzar to the abolition of serfdom in 1861, hunting with Borzoi reached the level of the national sport of the aristocracy, with hunts consisting of a hundred Borzoi or more, accompanied by mounted huntsmen and packs of foxhounds used to flush out the game.

After the collapse of serfdom in Russia, many kennels were broken up and it fell to dedicated breeders to preserve the breed. The breed suffered again during the Russian Revolution when, because of their association with the nobility, many were killed.

Despite these setbacks, Borzoi did find their way to other countries. Tzar Nicholas I presented a pair of Borzoi to Queen Victoria and this resulted in the breed soon becoming fashionable in British society. Borzoi first arrived in Australia from Russia in 1898 and were quarantined at Melbourne Zoo. Although Australia’s warm climate limited their use in hunting, crossbreds were popular.

Borzoi also began to be shown with the first Borzoi Show being held in Moscow in 1873, followed by shows in Britain. One Borzoi in particular, who was given to Queen Alexandra by Tsar Alexander II, was successfully exhibited on a number of occasions becoming undefeated champion.

In later years, during the Art Nouveau and Art Deco periods, Borzoi were often used in artistic works as their elegant shape complimented the flowing lines of those movements.

The Borzoi is an aristocratic hound, large, lean and strong. The males in particular can be deceptively powerful. They have a distinctive, long and narrow head with dark, far seeing eyes. Their back is gently curved, more pronounced in the males than females. The coat has a silky texture and can be curly, wavy or flat but never woolly. The coat on the body is quite short with long fringes on the front of the neck, chest, back of the legs and the tail. The texture is more important than the quantity as it assists in keeping the hounds warm in bitter Russian winters. It can also be equally effective as a protection against the heat.

Borzoi are one of the few breeds where all colours and patterns are permissible.

Borzoi are a quiet, sensitive and very gentle breed. They are very loving and attentive to their owners but can be aloof with strangers.

Typical of sighthounds, they tend to spend most of their time lounging about. One should never forget though, they are a hunting hound with very fast reflexes and can run incredibly fast if something catches their attention.

Borzoi tend to be a remarkably healthy breed. However, in common with other large, deep chested breeds, bloat and osteosarcoma can occur. Hip dysplasia is virtually unknown in the breed. DM (degenerative myelopathy) can be found in some bloodlines and breeders do test for it.

The Borzoi is a devoted and loyal family pet. When raised with children, most Borzoi make good companions but they are not a breed that will readily tolerate the rough and tumble of a young child.

Borzoi can live quite happily outside but love being with their family and do make excellent housedogs.

They are quiet and clean by nature and when inside, tend to curl up in a corner where they can keep an eye on their owners.

They tolerate the cold very well and in those parts of Australia where it snows, they can be seen contentedly stretched out in it snoozing. Owners do need to be mindful of them overheating in hot weather and provide suitable cool areas for them.

Although Borzoi don’t require a large amount of exercise, they do enjoy a good gallop and can walk for kilometres with more active owners. However, they are extremely fast runners and should not be let offlead unless they are in a securely fenced area.

Information from the Borzoi Club of NSW
Image by Volofin. Shutterstock

Now you know a little about the Borzoi you may have think that this is the dog for you. Before you make a decision, please make contact with the breed club or your State controlling body for purebred dogs. They will be able to give you information about available puppies and also suggest dog shows where you can see the breed and speak to breeders. In this way you will gain a better perspective of the Borzoi and its needs and whether this breed would suit your lifestyle.