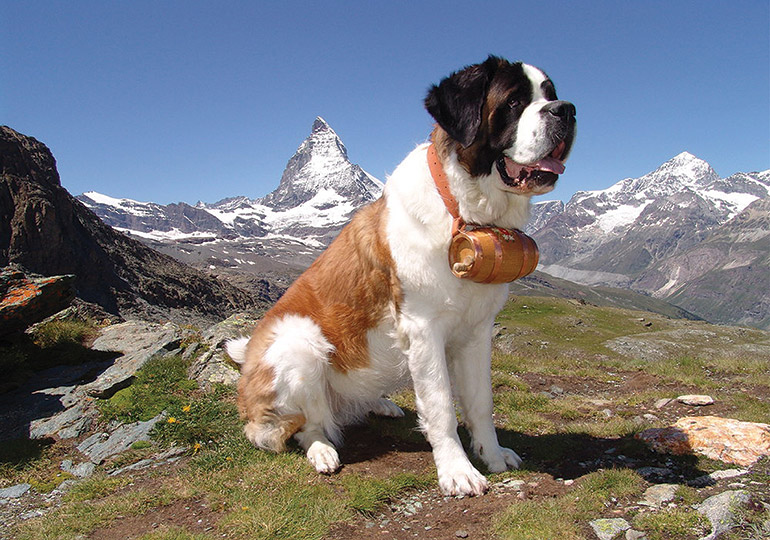 It is believed that the breed originated at this hospice in the mid-17th century, from large, Mastiff-like dogs and local Swiss breeds, and they were used as rescue dogs for lost travellers in the region.

In the 19th century, exports of Saint Bernards saw their popularity grow overseas. Queen Victoria owned two Saint Bernards in the 1840s, and they were very popular as companion dogs among the upper classes.

A Breed Standard was created in the 1880s, and breed clubs were formed in Switzerland as well as England and the US, at this time. The Saint Bernard is now recognised as Switzerland’s national dog.

The two varieties of the breed are both very large, and differ only in coat. The short-haired variety was used for rescues in the Alps, as the coat of the long-haired variety would have been impractical in the snow. Their appearance is impressive, with a large and powerful head, sturdy body and alert expression. Saint Bernards of either coat variety are primarily white, with reddish-brown patches or mantle, and dark markings on the head.

Saint Bernards, like a lot of breeds, love to be in the house relaxing with the family but, as there will be times when the dog will be outside, it is important to have a secure and fully fenced yard. If your Saint Bernard is going to live outdoors, ensure that it has a well insulated kennel that can be kept dry, clean and as cool as possible in the hotter months, as well as fresh, clean drinking water available at all times.

Access to slippery surfaces (such as slippery tiles, polished floors or steps) should be blocked while the dog is growing from puppyhood to young adulthood.

There are a number of conflicting ideas on the ideal diet to rear a Saint Bernard puppy. Unfortunately no universal, foolproof diet exists. Individual dogs have individual requirements, dependent upon bloodlines, age, size, environment and activity levels.

Reputable breeders advise purchasers on their recommended diets, and it is generally best to follow the program already commenced by the breeder. If no advice is available from the breeder consult your veterinarian.

The main mistakes new owners make are over feeding, over-supplementing with vitamins and additives and feeding an imbalanced diet.

A predominantly meat-based diet can cause imbalances in the calcium-phosphorus ratio, as meat is very high in phosphorus and low in calcium, and the correct balance of calcium is necessary for correct bone growth and to minimise bone disorders.

Most reputable processed dry foods (kibble or processed meat substitutes) are reasonably well balanced, so that if you feed your dog the recommended amounts the diet should be sufficiently balanced in calcium, phosphorus, protein and calories.

Ensure water is readily available when feeding kibble, and you can also add water to the kibble. The most important point to remember is not to over-supplement the diet with vitamins and additives. A puppy that is fed a diet too high in vitamins can develop problems just as serious as one that is victim to lack of nutrition. Balance is the key.

Regular combing and brushing of Saint Bernards is essential, as it removes dust, loose hairs, grass seeds, tangles and avoids matting of the coat. When brushing, pay particular attention to the feet, under the forearms and rear end. A dog that is dirty or smells should be bathed, but this should not be more than once a week. A dog shampoo should be used and should be thoroughly rinsed from the coat. Your breeder or local groomer can advise you on grooming your Saint Bernard.

There are many theories on the amount of exercise a young pup needs, ranging between the extremes of not exercising it at all until it is at least six months old, to running it five kilometres a day. Moderation is the key. While all care can be taken in breeding to help minimise such things as hip problems, if the dog lacks muscle development the hip socket, no matter how well formed, has no muscle to hold it in place. However, excessive exercise for puppies under 9-12 months of age can cause damage to undeveloped bones and joints, so care must be taken not to over exercise a young dog.

If the pup is naturally active, playing in the backyard or running around on acreage, it probably will not require any extra exercise. However, if it prefers to sleep all day, waking only for meal times, then moderate exercise for necessary muscle development may be required. On a daily walk, gauge the distance by your own dog. Don’t force it to do a set distance each day. As it gets older, it will obviously be able to and want to walk further, but always let it be the guide as to how far it can go.
It should still be reasonably active by the time you return home, rather than exhausted, dragging behind you or insisting on being carried.

Your pup should look forward to going on its walk with you, as this is the time to investigate new smells, trees and lamp posts. You name it, your pup will investigate it, while enjoying your undivided attention. It’s also a good opportunity for obedience or lead training. Saint Bernards are very intelligent (looks can be deceiving), enjoy learning and are usually very eager to please.

Now you know a little about the Saint Bernard, you may have think that this is the dog for you. Before you make a decision, please make contact with the breed club or your State controlling body for purebred dogs. They will be able to give you information about available puppies and also suggest dog shows where you can see the breed and speak to breeders. In this way you will gain a better perspective of the Saint Bernard and its needs and whether this breed would suit your lifestyle. 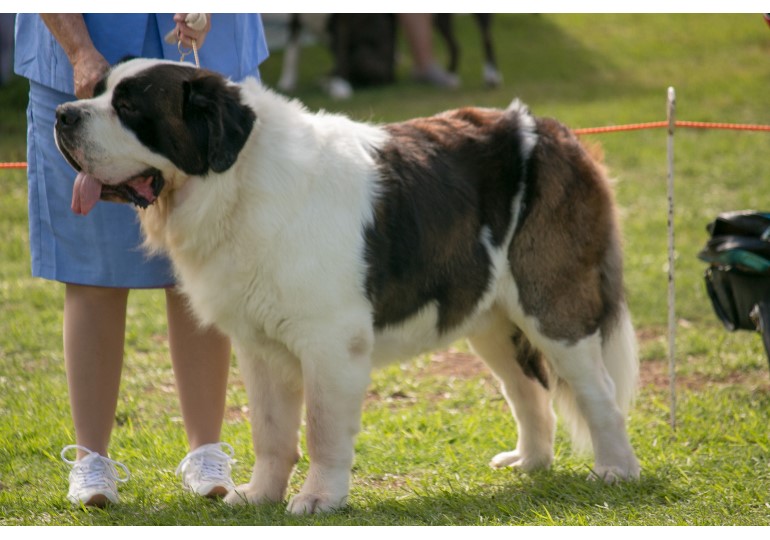 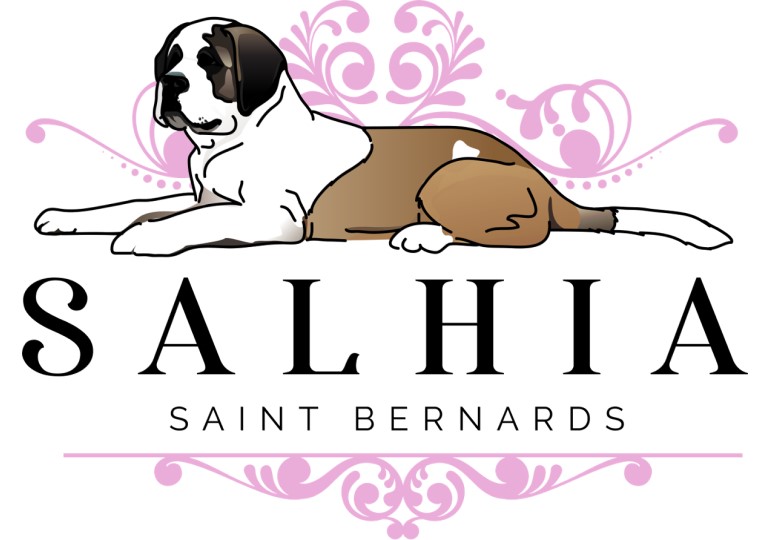