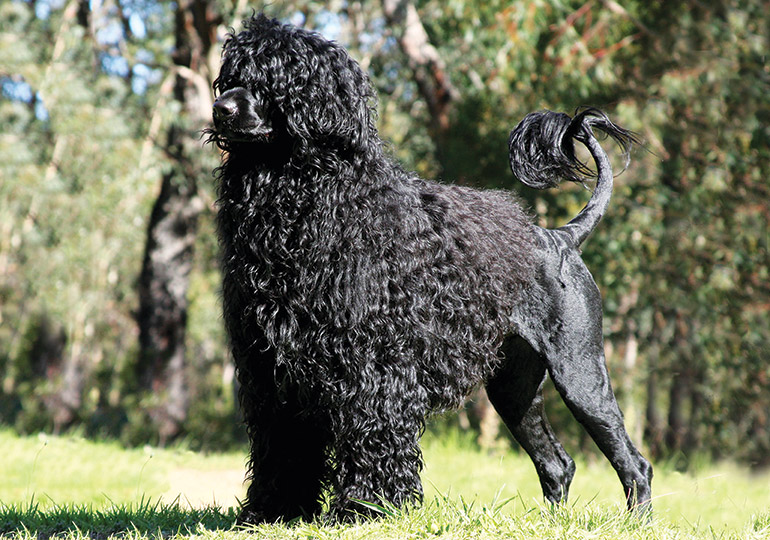 The Portuguese Water Dog was first described in a monk’s account of a drowning sailor, who was pulled from the sea by a black dog with its hair cut in a lion trim, and became known as a ‘lion dog,’ due to its trim. The hair was cut like this for faster propulsion in the water while keeping the coat over the major body organs, keeping them protected from the sometimes very cold waters. There is a belief that the breed existed as far back as 700BC.

The Portuguese Water Dog is an endearing and loving breed. Their love for their owners and zest for life is an amazing quality. This breed loves the water, they are big swimmers and have web feet. They are a retrieving breed that enjoys retrieving both in and out of the water. They are one of a few breeds that will duck dive underwater to retrieve and love to greet you with a toy, hoping to play. Portuguese Water Dogs love their toys and enjoy cuddling up to and caressing them.

The breed, kept in the true Portuguese Water Dog ‘lion trim,’ would be trimmed from the last rib to the last third of the tail, with the muzzle trimmed from the outside corner of the eye to down under the chin. This was done for their working ability as swimming dogs, herding fish, retrieving lost tackle, untangling nets or acting as couriers from ship to ship or ship to shore.

In Australia a Portuguese Water Dog must be shown in their working trim.

Their coat is single layered hair and is non shedding, making them very suitable to those who suffer allergic reactions to pet fur, or those that just don’t like fur everywhere. There are two types of coats, some being wavy and others curly. The wavy falls gently in waves with a slight sheen. The curly coat has compact cylindrical curls that gives an aphro look and lacks lustre. Both coats still feel quite soft to touch, with the curly having a slightly harsh texture.

The Portuguese Water Dog is a breed that enjoys human company, are highly intelligent and easily trained. They enjoy being close to their owners. They are not a breed that can be left alone for long periods of time without training, stimulation or company.

The Portuguese Water Dog has a multi-octave voice. Some of them are said to “yodel” when excited, especially when greeting a returning master. Although they are not prone to barking excessively, they have a wide range of barks and sighs, as well as an audible “laugh” a loud, irregular, breathy pant used at play or during greetings. This is sometimes called “expressive panting”.

The Portuguese Water Dog makes an excellent watch dog due to its determination to defend its territory with a very loud and distinctive bark. However it will rarely attack an intruder after having given the alarm-barks, so it is not considered a guard dog in the normal sense. In fact, many Portuguese Water Dogs will, without training, bark three or four times then rush to their master’s side to await further instructions on how to relate to a perceived intruder.

The Portuguese Water Dog’s high intelligence, bidability and tendency to vocalise, then seek out its human master when specific alarms occur, is why they are suited to the hearing impaired and can be easily trained.

The Portuguese Water Dog generally have a lifespan of 10-16 years. There are some known genetic health issues for which DNA profiling can be sourced to ensure to ensure healthy dogs are bred, but as in any breed there are issues that can arise without reason.

The Portuguese Water Dog makes an excellent companion for all ages, even the disabled and the hearing impaired. They are loving, loyal, highly intelligent and easily trained. They enjoy being a loyal carer, especially to their number one. The Portuguese Water Dog is suitable to families that are prepared to have them inside as a family member, as well as outside. They enjoy many outdoor activities, especially those in and around the water. They suit families that are prepared to spend time with them as well as training stimulation.

This breed is active, and well suited to many dog sports. With their loving, independent, and intelligent nature, they are easily trained in obedience and agility skills. Once they are introduced they are generally friendly with strangers and actively enjoy being petted, which, due to their soft fluffy coats, is usually willingly granted.

Although the Portuguese Water Dog can be a very gregarious animal, they can typically bond with one primary or alpha family member. They like to stay in close proximity of their owners both indoors and outdoors. When outdoors they usually stay where they can still see or hear you. Some say this is called “Velcro bonding” which is a trait that arose in the breed because the dogs were selected to work in close proximity to their masters on small fishing boats; unlike other working dogs that range out to perform tasks.

The modern Portuguese Water Dog, whether employed on a boat, or kept as a pet or working therapy dog, loves attention and prefers to be engaged in activity within sight of a human partner. This is not a breed to be left alone for long periods of time, indoors or out.

Now you know a little about the Portuguese Water Dog, you may have think that this is the dog for you. Before you make a decision, please make contact with the breed club or your State controlling body for purebred dogs. They will be able to give you information about available puppies and also suggest dog shows where you can see the breed and speak to breeders. In this way you will gain a better perspective of the Portuguese Water Dog and its needs and whether this breed would suit your lifestyle.