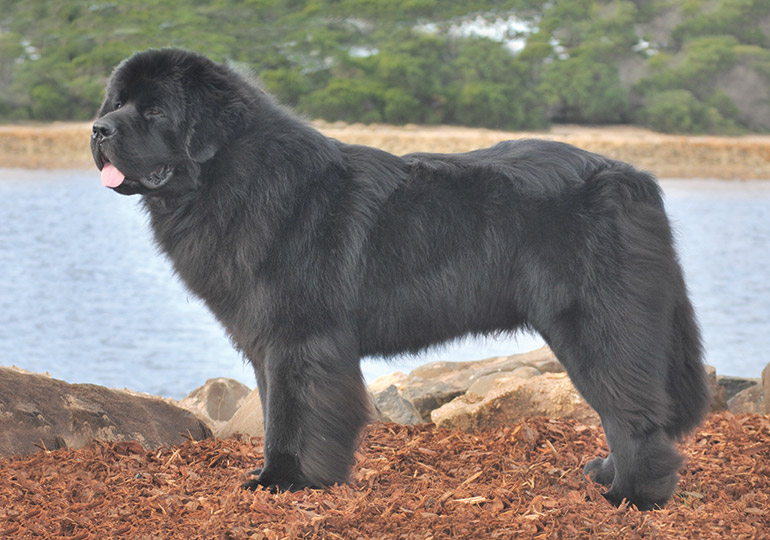 Newfoundlands are named after their province of origin in Canada. They are believed to be the product of indigenous and black bear dogs that were introduced to the area by the Vikings. The chief industry of Newfoundland, an island of Canada, was fishing. ‘Newfs’, as they are colloquially known, were used to haul fishing nets and to retrieve objects or people who fell into the sea. The breed’s massive frame, large lung capacity and webbed feet allowed it to swim long distances, and the water-resistant double coat protected it from the icy temperatures of the ocean.

The breed’s immense size and strength also made it useful for hauling carts to town with the day’s catch, or for delivering milk and mail. Newfoundlands were kept as crew on sailing ships, and swam to land carrying a line if the seas were too choppy. It is well known for its natural lifesaving instincts, and there are many legends of Newfoundlands carrying lifelines to sinking ships to save a drowning crew.

As a utility and rescue dog, the Newfoundland was bred for its aptitude in the water. Its swimming technique is closer to a breaststroke than a doggie paddle, following a strong, down-and-out motion that allows it to power through long distances. The Newfoundland is known for its muscular build and calm disposition.

A caring, loyal dog, it is a true gentle giant. The breed shares many of its characteristics with Mastiffs and mountain dog breeds, including a large head and broad snout. The Newfoundland is prone to excessive drooling.

The Newfoundland’s sweet disposition is the hallmark of the breed. Breed standard states that sweetness of temperament is the most important single characteristic and any sign of poor temperament cannot be tolerated. It is calm, intelligent and loving, but that’s not to say that these big, furry giants can’t be a handful. Obedience training is a must from an early age, as an undisciplined mass of fur and drool can do a lot of damage. It is an extremely social dog and must be treated as part of the family. Left in its own company for too long these dogs can become depressed and destructive. Although they possess a strong guardian instinct, the Newfoundland is a companion dog, not a guard dog.

The Newfoundland is massive, deep bodied, well muscled and coordinated. Although it is large, its size should not be to the detriment of agility and gracefulness.

As an unrivalled canine swimmer, lung capacity is paramount. Being well ribbed up and back is a matter of survival in this breed. The accepted colours under the breed standard are black, brown and white with black markings.

These markings are called Landseers, named after the British artist Sir Edwin Landseer, who painted many portraits of this type of Newfoundland.

The breed doesn’t require a lot of exercise, but  will lean on the side of laziness if allowed. As puppies, exercise should be kept to a minimum to avoid joint damage.

As it gets older, a daily 30-minute walk is enough to keep an adult Newfoundland healthy and happy. Being a water breed, swimming is a preferred exercise because it puts very little pressure on its joints. Newfoundlands tend to shed all year round, and blow coat at least once a year. One of the pitfalls of having one of these beautiful dogs is the excess of hair – it tends to spread throughout the house.

Regularly grooming is an absolute must. As they have a double coat, matting is a common problem for Newfoundlands and failure to maintain a regular brushing routine can lead to skin infections that are difficult to overcome.

Even if your Newfoundland isn’t a showdog, it will still require occasional fur trimming. Excess hair around the pads of the feet and between the toes can cause unsure footing on slippery surfaces.

Joint problems can be a common problem, as with most large breeds. Registered breeders will provide detailed instructions for growing the breed as soundly as possible. Parents should be hip and elbow scored and buyers should ask to see them. It is important for breeders to supply a clearance form for cystinuria. Heart problems also tend to be a common concern for the Newfoundland, so it’s imperative to send your puppy to the vet for a heart check as early as possible.

Now you know a little about the Newfoundland, you may have think that this is the dog for you. Before you make a decision, please make contact with the breed club or your State controlling body for purebred dogs. They will be able to give you information about available puppies and also suggest dog shows where you can see the breed and speak to breeders. In this way you will gain a better perspective of the Newfoundland and its needs and whether this breed would suit your lifestyle.