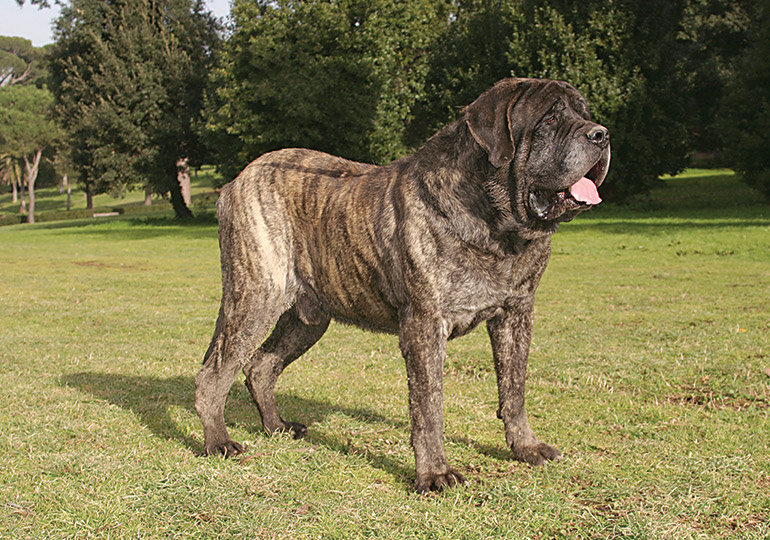 The life of the Mastiff began as a guard dog, bred mostly by members of the aristocratic society to protect their large estates from poachers and burglars. Mastiffs were later bred with Regency Bulldogs to produce the Bullmastiff, which was known as the ‘gamekeeper’s dog’, and the purebred Mastiff was relegated to the home for protection. Mastiffs made their first appearance in Australian history in the late 1700s. In the early days of settlement, they were considered more of a type than a breed, and the Mastiff was used to guard the penal colony of Port Arthur.

According to Walter Bielby, author of The Dog in Australasia, the Mastiff was a very popular breed and a club was formed around 1891. Many were imported from England and made the long trip by ship to settle here. All of these lines eventually died out. Australia witnessed a rebirth of the breed in the 1960s, when two kennels imported a large quantity of Mastiffs to Victoria (Heatherglen) and Queensland (Fanifold). The result of these imports certainly established the breed once again. Australia is now considered a strong Mastiff breeder and exports them all over the world.

The Mastiff’s temperament should be one of grandeur and good nature. This is a very impressive breed to look at but when you get to know it you really fall in love. The Mastiff is a guardian and loyal companion. It doesn’t show aggression or anger but it will protect its owner from anything it considers a threat until all is well. It won’t bark unnecessarily and is generally easily trained. The Mastiff gets on well with other animals in the family.

The very name of this breed automatically makes one think ‘big’, and the Mastiff certainly is a very large dog. When looking at a good specimen of the Mastiff, one should see a dog of immense size, a head that looks square from all angles and a broad deep muzzle. The ears should be set on high and taper to a ‘v’ shape. The eyes are dark. The body should be longer than that of a Bullmastiff with legs showing strong bone and nice tight feet. Movement should show reach and drive. To use an old saying, Mastiffs should power around the ring like a Clydesdale, not a thoroughbred. The colours are fawn, apricot and brindle and in each case it must have a black mask.

Mastiffs are fairly low maintenance. Its short coat makes for easy grooming, requiring only a few minutes daily. Once it reaches adulthood, the Mastiff doesn’t eat as much as you would expect for its size. But since it grows at an exceptionally fast rate, it’s important to keep portion sizes up in the early years. The downside of owning a Mastiff comes in two areas – one is veterinary costs. When drugs are dispensed on size they can be expensive. Also, things like flea treatment and heartworm prevention can certainly put a hole in the pocket.

The negative side for many is the drool. Mastiffs are renowned for this and, if you can’t handle dogs that slobber, this is not the breed for you. Most Mastiff owners have cloths in all rooms of the home for wiping those huge jowls. When a Mastiff has a drink of water and decides to shake its big head, stand clear.

These days, most breeders have their breeding animals scored for hip and elbow dysplasia; some have eye and heart checks as well. I would certainly recommend only buying from breeders that at least have the hips and elbows done. A good breeder will answer all your questions and allow you to see the dam and litter with no problems. In some cases the sire may also be present.

For such a large dog, the Mastiff is extremely gentle and loving. If you have a young child and introduce a Mastiff to the family, your child will have the most wonderful friend you could ever wish for. Mastiffs make loving and loyal companions, but be warned, they are addictive. Once you fall under the spell of a Mastiff, there is no going back.

Now you know a little about the Mastiff, you may have think that this is the dog for you. Before you make a decision, please make contact with the breed club or your State controlling body for purebred dogs. They will be able to give you information about available puppies and also suggest dog shows where you can see the breed and speak to breeders. In this way you will gain a better perspective of the Mastiff and its needs and whether this breed would suit your lifestyle.