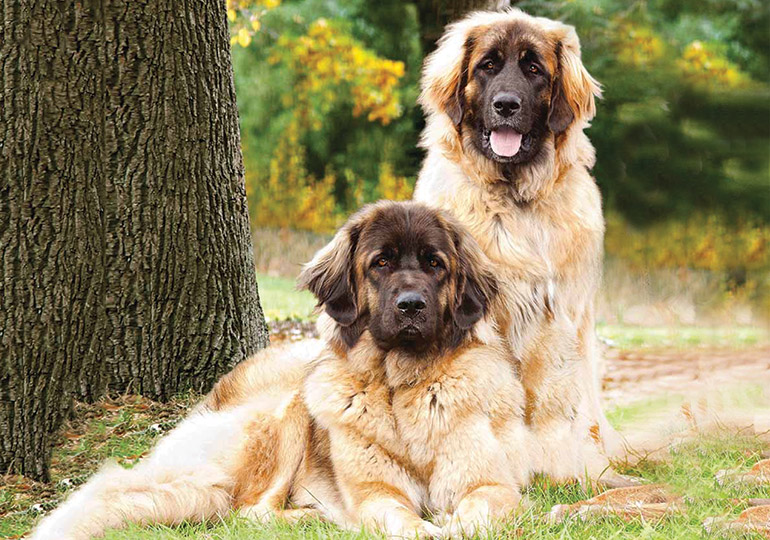 The Leonberger originated in the town of Leonberg, Germany, in the 1840s. According to local legend, the entrepreneurial dog breeder Heinrich Essig set out to create a breed of dog that resembled the heraldic lion on the town’s crest. Essig is said to have crossed the Newfoundland, St Bernard and Pyrenean Mountain Dog to create the Leonberger. However, research shows the distinctive Leonberger colouring of a pale cream to rich red coat, overlayed with black sabling and mask, is not possible from this genetic combination alone. So, it is likely Essig used other local breeds.

As a family dog, the Leonberger’s temperament is of the utmost importance. The standard says ‘calm, conﬁdent and lively’, and although somewhat contradictory, it is absolutely true. While the breed may go through a shy period in its teens, it is generally an easygoing dog and its lively nature makes it amenable to training and dog sports. Often referred to as a gentle giant, the breed also makes an excellent therapy dog. It can be a good alert barker at home, but the Leonberger should never be aggressive. The female tends to make a better watchdog, while the male is more laidback.

The Leonberger is a giant, long-coated breed and its colour varies from a pale cream to a rich red, with a black tipping and mask. The Leonberger male should be powerful and strong, standing at 72–80cm at the withers, while the female ranges from 65–75cm.

The breed’s thick double coat requires a weekly brush to keep it free of knots, although a puppy’s coat may require more work. Leonbergers moult twice a year and during these times beneﬁ t from extra grooming. Some trouble spots, such as behind the ears, leg feathering and the tail, may require daily grooming. For the show ring, the coat is left natural apart from the feet, which are trimmed. Their ﬂ uﬀ y feet can attract seeds, so it is good practice for owners to learn how to trim their dog’s feet.

The Leonberger is also quite active for a giant breed and enjoys a regular walk, swim or visit to the park or beach. As with most giant breeds, it requires a high-quality diet and monitored exercise when growing. Costs should also be taken into consideration too, as vet bills and grooming are more expensive with a large dog.

The Leonberger is a relatively healthy breed, but there are some known issues in the breed that should be tested for. These include Star Cataracts and Leonberger Polyneuropathy (LPN 1). Breeding dogs should also be hip and elbow scored. As with most double-coated dogs, ‘hot spots’ can develop under the coat. Not over-exercising young pups, feeding a sensible diet, and waiting until maturity for desexing can also help decrease any propensity for developing joint issues.

The Leonberger is primarily a companion dog, so it is not a breed that is happy to be left alone for extended periods of time. It is smart and can be easily trained, although the breed can get bored with repetition, so training needs to be kept fun! The Leonberger is renowned for its love of children but does equally well with singles and retirees. In short, a Leonberger is suitable for anyone who is willing to involve it in their family life.

Now you know a little about the Leonberger, you may have think that this is the dog for you. Before you make a decision, please make contact with the breed club or your State controlling body for purebred dogs. They will be able to give you information about available puppies and also suggest dog shows where you can see the breed and speak to breeders. In this way you will gain a better perspective of the Leonberger and its needs and whether this breed would suit your lifestyle.