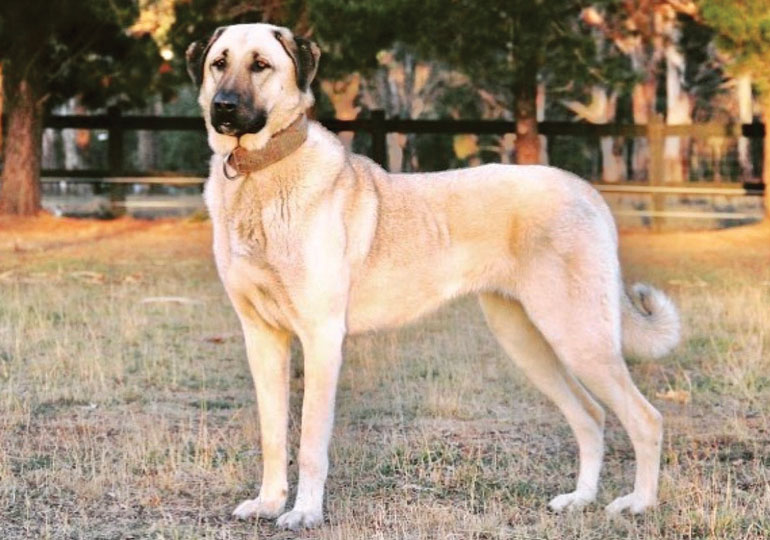 The name derives from the town Kangal which is connected to the Central Anatolian city of Sivas. Colloquially, the Turkish people refer to these dogs as Sivas Kangal or more officially Kangal Coban Kopegi (Kangal Shepherd Dog).

Kangal Shepherd Dog is considered to be an ancient or primitive breed. For centuries it has successfully protected herds of sheep in the Sivas region, against jackals, wolves and bears. Almost exclusively found in Sivas region until the 80s, Kangal dogs can now be found all over Turkey. It is not possible to conclusively determine the exact origins of the Kangal Shepherd Dog. One common theory is that these dogs have come to Anatolia with the migrating Turkic tribes from Asia in the 11th century.

Kangal Shepherd Dog’s existence outside of Turkey is nascent. Their rapidly increasing popularity overseas can be attributed to their gentle character combined with their unrivalled ability to protect livestock against all kinds of predators.

Large, muscular and rectangular from the side profile, the Kangal dog possesses speed like a cheetah, agility like a leopard and strength like a lion. The tail is characterised by a curl that becomes tighter and held above the back line when fully alert. The most important and distinguishing feature of the Kangal dog is its head shape. From the side, Kangal dog displays a rather flat skull, and a strong muzzle. Combined with almond shaped eyes that are positioned slightly to sides, a strong neck and a thick double layered coat in winter, the Kangal dog manifests a regal appearance like a wolf.

3-7cm long, in winter Kangal possesses a double coat structure - a thick and harsh guard coat with a dense undercoat. The coat is slightly longer around the neck, shoulder and thighs. Shedding occurs once a year in Spring time. This coat structure makes Kangal adaptable and resilient to cold and hot climates.

Body colour ranges from fawn to wolf sable. White socks is common and white on chest is acceptable. White on neck is not preferred. The head is characterised with a black mask and ears darker than general coat colour. All puppies are born with a strong black mask, which can become less pronounced as they mature.

Kangal is intelligent, independent, and courageous. Calm and vigilant, the Kangal dog can quickly switch to high alert by the slightest sounds and scents. With a strong intuition he is an expert at accurately identifying threats. They are affectionate, loyal and gentle. Their gentleness with small children, the fragile and elderly, as well as their gentleness towards all creatures large and small, is leading to it’s popularity as guardians. Regarding their human family as “flock”, they guard them as well as their animals with extreme devotion and loyalty.

Note: Kangal dog does not need training to protect. Just letting the puppy free amongst the herd of sheep is all one needs to do. Even a full grown Kangal that has never seen livestock can naturally bond and start working as a livestock guardian very quickly.

As they are a large breed, a rapidly growing Kangal can develop hip dysplasia. Thus, it is paramount that while they are growing they are put on a low protein diet to sustain a slow and steady growth. In their homeland Turkey, the shepherds feed them exclusively with barley mixed in water. On the odd occasion they are treated with meat from livestock. Kangals have been feeding in this style for centuries and should continue to do so even in the western world. They are not big eaters and so a cup of oats and a handful of low protein kibble mixed in water makes an ideal feed.

On average they live between 12-15 years.

Speed, agility and strength combined with unyielding courage and loyalty - the Kangal Shepherd Dog has successfully protected flocks of sheep in the open harsh wild central tablelands of Turkey against jackals, wolves and bears for centuries. With the ever-growing wild dog problem in Australia, Kangals are quickly proving to be the most reliable, cost efficient and environmentally friendly solution. Similarly they are also becoming increasingly popular as gentle affectionate guardians in family homes.

Note: A pair is sufficient for large herds of sheep even in the heavily populated wild dog regions.