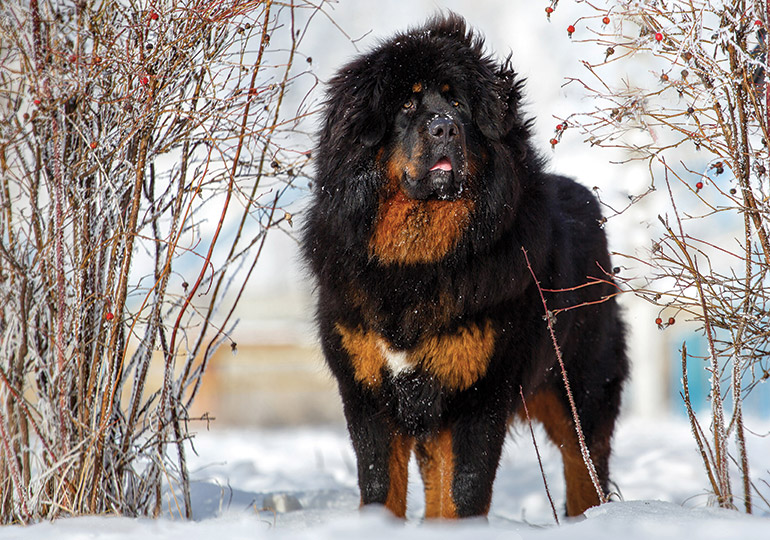 The Tibetan Mastiff is a large Tibetan dog breed. It originated with the nomadic cultures of Tibet, China, India, Mongolia and Nepal, being used by local tribes of Tibetans to protect sheep from wolves, leopards, bears, large mustelids and tigers. (1)

In 2008, a mitogenome study concluded that while 12 dog breeds studied appeared to have diverged from the gray wolf 42,000 years ago, the Tibetan Mastiff lineage diverged earlier at 58,000 years ago. (2)

In 2011, a further study by the same authors concluded that there was a genetic relationship between the Tibetan Mastiff and the Great Pyrenees, Bernese Mountain dog, Rottweiler and Saint Bernard, and that these large breed dogs are probably partially descended from the Tibetan Mastiff. (3)

In 2014, a study added the Leonberger to the list of possible relatives. In 2016, a study looked at how the Tibetan Mastiff was able to adapt to the extreme highland conditions of the Tibetan Plateau very quickly compared to other mammals such as the yak, Tibetan antelope, snow leopard, and the wild boar. The study indicated that the Tibetan mastiff's ability to avoid hypoxia in high altitudes, due to its lower hemoglobin levels compared to low-altitude dogs, was due to prehistoric interbreeding with Tibetan wolves. (4)

In 1872, one writer has stated: The dogs of Tibet are twice the size of those seen in India, with large heads and hairy bodies. They are powerful animals, and are said to be able to kill a tiger. During the day they are kept chained up, and are let loose at night to guard their masters' house. (5)

In the early 20th century, King George V introduced a pair of Tibetan Mastiffs, and enough of the breed were available in England in 1906 to be shown at the Crystal Palace show. however, during the war years, the breed lost favor and focus and nearly died out in England. (6)

After 1980, the breed began to gain in popularity worldwide. Although the breed is still considered somewhat uncommon, as more active breeders arose and produced adequate numbers of dogs, various registries and show organisations (FCI, AKC) began to recognise the breed. In 2008, the Tibetan Mastiff competed for the first time in the Westminster Kennel Club Dog Show. (1)

Large, powerfully built, slightly longer than high. Well boned and muscled, never light but always agile. Impressive head provides a noble, dignified look, enhanced by a mane, which is more pronounced in males, balanced by a well feathered tail carried over the back. (6)

The coat of a Tibetan Mastiff lacks the unpleasant big-dog smell that affects many large breeds. The coat, whatever its length or color(s), should shed dirt and odours. Although the dogs shed somewhat throughout the year, there is generally one great moult in late winter or early spring and sometimes another, lesser moult in the late summer. (Sterilization of the dog may dramatically affect the coat as to texture, density, and shedding pattern.) (1)

Tibetan Mastiffs are shown under one standard in the West, but separated by the Indian breed standard into two varieties: Lion Head (smaller; exceptionally long hair from forehead to withers, creating a ruff or mane) and Tiger Head (larger; shorter hair). (1)

A loyal companion and guardian. Slow to mature. Independently minded, aloof and protective. Calm and patient. May be wary of strangers. (6)

As a flock guardian dog in Tibet and in the West, it uses all the usual livestock guardian tactics (e.g., barking, scent-marking perimeters) to warn away predators and avoid direct confrontations. (7)

As a socialised, more domestic dog, it can thrive in a spacious, fenced yard with a canine companion, but it is generally not an appropriate dog for apartment living. The Western-bred dogs are generally more easy-going, although somewhat aloof with strangers coming to the home. Through hundreds of years of selective breeding for a protective flock and family guardian, the breed has been prized for being a nocturnal sentry, keeping would-be predators and intruders at bay, barking at sounds throughout the night. Leaving a Tibetan Mastiff outside all night with neighbors nearby is not recommended. They often sleep during the day, making them more active, alert and aware at night. (7)

Like all flock guardian breeds, they are intelligent and stubborn to a fault, so obedience training is recommended (although it is only mildly successful with some individuals) since this is a strong-willed, powerful breed. Unless they are to be used exclusively as livestock guardians, socialization obedience training is also critical with this breed because of their reserved nature with strangers and guardian instincts. They can be excellent family dogs depending on the family. Owners must understand canine psychology and be willing and able to assume the primary leadership position. Lack of consistent, rational discipline can result in the creation of dangerous, unpredictable dogs. The protectiveness of Tibetan Mastiffs requires alertness and planning by the owner in order to avoid mishaps when the dog is simply performing as a guardian. The breed is not recommended for novice dog owners. (7)(8)

Now you know a little about the Tibetan Mastiff, you may have think that this is the dog for you. Before you make a decision, please make contact with the breed club or your State controlling body for purebred dogs. They will be able to give you information about available puppies and also suggest dog shows where you can see the breed and speak to breeders. In this way you will gain a better perspective of the Tibetan Mastiff and its needs and whether this breed would suit your lifestyle.