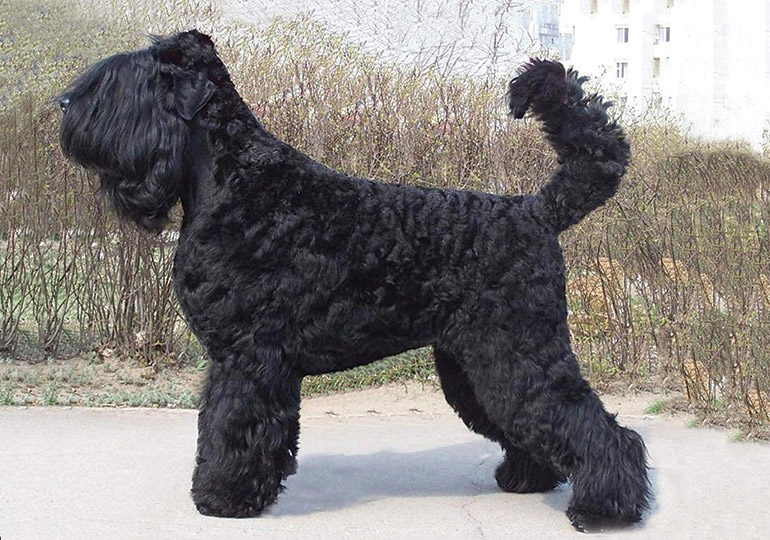 The Russian Black Terrier was created in Russia during the late 1940s and the early 1950s by selective interbreeding of breeds like the Rottweiler, Giant Schnauzer, Airedale Terrier and Newfoundland Dog. The Giant Schnauzer is considered to be the main ancestor of the breed. The initial breeding was supervised by the military cynological school outside Moscow and the dogs were based in their kennels named “Red Star”. The aim of the creators of the breed was the development of a large, brave, strong and manageable working dog with pronounced guarding instinct; a dog which could be useful for many services and adapts well to various climate conditions. The breed was recognized by the FCI in 1984.

The Russian Black Terrier is a large dog with a slightly long body and very athletic built, of a robust type and hardy constitution. The breed has qualities like massive bone and powerful muscles. It is symmetrical with a large head, a compact body and a voluminous and deep chest. Differences between the sexes to be clearly defined.

IMPORTANT PROPORTIONS: The length of the body is slightly longer than the height at the withers, could be more pronounced in females.

Tail traditionally docked in country of origin. An undocked tail’s length or shape has no influence on the evaluation of the dog. Preferable shape of the undocked tail is sabre or sickle.

Hair: Rough and thick double coat. Composed of a coarse, thick, slightly waved outer coat and a soft, short and dense undercoat. The outer coat covers the whole body. The natural and untrimmed coat length is between 5 - 15 cms. The head furnishing is very well developed and forms abundant eyebrows, moustaches and beard. Legs are covered in long, dense, furnishing coat.

Grooming in the correct form is required. The clipped coat should emphasise the character of a strong and assured dog and by no means be excessively decorative. The coat is left longest on legs and around the muzzle. The clipping should accentuate the massive head with flat forehead, well lying ears, strong neck and well constructed, strong body. Colour is black; black with insignificant intermingling gray hair is permissible. (Grey intermingling hair not to cover more than a 1/3 of the whole body).

A dignified and confident dog; well controlled in all situations. When circumstances require, he immediately assumes an active-defensive posture, however, quickly calms down at the disappearance of threat. This handsome breed is amiable and has great endurance; it is undemanding, smart and friendly. It adapts well to training and various climate conditions and is hard working and reliable.

Now you know a little about the Russian Black Terrier, you may have think that this is the dog for you. Before you make a decision, please make contact with the breed club or your State controlling body for purebred dogs. They will be able to give you information about available puppies and also suggest dog shows where you can see the breed and speak to breeders. In this way you will gain a better perspective of the Russian Black Terrier and its needs and whether this breed would suit your lifestyle.