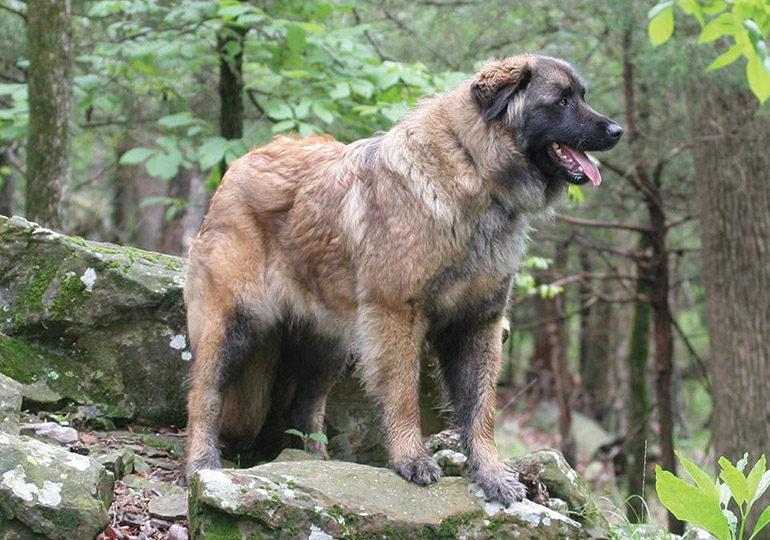 Although this dog has developed and settled in the Estrela Mountains area, its true origin has been lost in time. Nevertheless, it can be considered one of the most ancient breeds in the Iberian Peninsula. It can be found from the foot of the mountains to the summit (approximately 2000 m), mainly in the summer, after the snow has melted, when the green pastures are much sought after by the herds, because the excessive heat has dried the grass on the lowlands. The progressive recognition of its aptitudes has led to its diffusion throughout the world since the second half of the 20th century. (2)

Large, mastiff-type molossoid dog. There are two varieties of coat: long and short. Rustic, substantial, with brisk gait and an impressive attitude.

The breed has a lively, calm and expressive look; it is well proportioned; well made with harmonious appearance, which is traditionally how the breed has been recognised since a long time.

Hair: Strong, very abundant, slightly coarse, without excessive harshness, the texture is similar to goat hair. The undercoat is composed of fine hair, short, abundant and entangled, normally lighter in colour than the outer coat.

Long-haired variety: Straight or slightly wavy top coat, uneven in some areas. It is shorter and more dense on the limbs, below the elbows and hocks, as well as on the head; on the ears, it becomes gradually shorter from the base to the tip, becoming thinner and softer. It is longer on the tail, which is bushy, thick and feathered, around the neck and throat and on the buttocks, which are abundantly feathered, as well as the back side of the forearms.

Short-haired variety: Short hair, evenly distributed over the body, slightly shorter on the head and limbs, without feathering.

The following colours are accepted and considered typical:

Brindle: Fawn, yellow or grey base colour with blackish brindling. In the cranium-facial area, a dark coloured mask is typical.

White markings are admitted only at the extremities of fore- and hind feet and on a small extension on the lower region of neck and chest. (2)

Inseparable companion of the shepherd and faithful flock guardian, bravely protecting it against predators and thieves. Wonderful farm and house guard, distrustful towards strangers and typically docile to its master. (2)

It is calm but fearless and will not hesitate to react to danger, making it an exceptional watchdog as well as an excellent guard dog. It is intelligent, loyal, and faithful, affectionate to those it knows but wary of those it does not. It is instinctively protective of any children in its family. It needs early and continued socialisation to be trustworthy around small pets and other dogs. (1)

It's important to begin training and socialising this breed from puppyhood ,to nurture its acceptance of different situations. This is a strong independent-minded breed that will need persistent training and consistent leadership. It has a tendency to bark, especially when protecting his or her territory. As with most livestock guardians, the Estrela dog is not a "pet" for everyone. Strong ownership is paramount. (1)

Now you know a little about the Estrela Mountain Dog, you may have think that this is the dog for you. Before you make a decision, please make contact with the breed club or your State controlling body for purebred dogs. They will be able to give you information about available puppies and also suggest dog shows where you can see the breed and speak to breeders. In this way you will gain a better perspective of the Estrela Mountain Dog and its needs and whether this breed would suit your lifestyle.