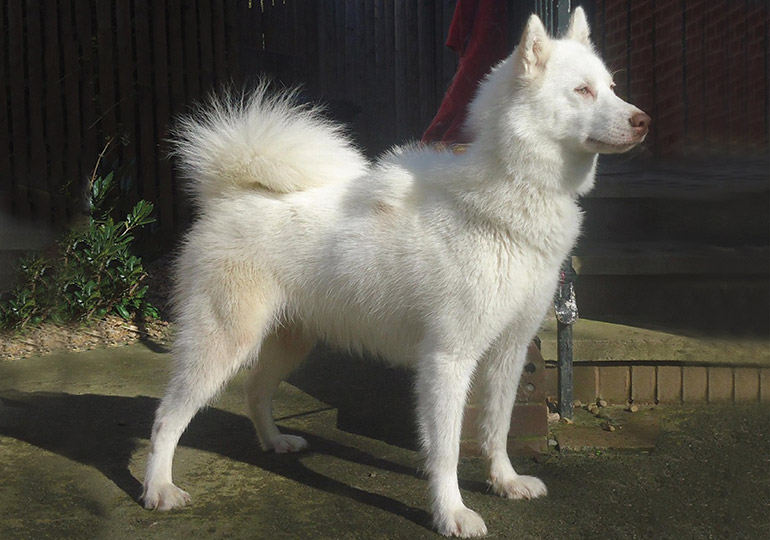 A dog of the Canadian Arctic, the Canadian Eskimo Dog is called ‘Qimmiq’ by the Inuit. The breed proved popular with Arctic explorers and earned a reputation as a sled dog that could pull the heaviest loads over the greatest distances on the least amount of food. As snowmobiles gained favour, the number of Eskimo Dogs declined dramatically. In the 1970s, a project headed by William Carpenter and funded by The Canadian Kennel Club, the Canada Council and private individuals saved the breed from extinction. (1)

The Canadian Eskimo Dog is a powerfully built, moderately sized dog with a thick neck and chest and medium length legs. Typical of the spitz family of dogs he has a wedge shaped head held high with erect ears. The eyes are obliquely set giving a serious appearance. The dog has a bushy tail carried up or curled over the back. Well muscled, the dog displays a majestic and powerful physique giving the impression that he is not built for speed, but rather for hard work. During the winter the body is thickly clothed with an outer coat of straight or erect hair, below is dense undercoat, which enables the animal to easily to withstand the rigours of high latitudes. A mane like growth of longer hair over the neck and shoulders will appear on male specimens. The whole conformation of the Canadian Eskimo Dog should be one of strength, power and endurance balanced with agility, alertness and boldness. The female of the breed will usually have a shorter coat than the male and will always be significantly smaller than the males. As young bitches, they will be finer boned giving among other things a narrower head which tends to produce a friendlier looking face than with the males. (2)

Coats may be all white, red, buff, cinnamon, grey or sable with white markings. (1)

The temperament of the Canadian Eskimo Dog should reflect the tough hard-working breed that he is. He is not to be viewed as a domestic pet but rather as a primitive dog originally domesticated by Inuit for specific tasks in a harsh arctic environment. In general disposition, the mature Canadian Eskimo Dog is gentle and affectionate with the average individual, enjoying attention. Even with total strangers the dogs are rarely standoffish. Usually they will exhibit a rather quiet friendliness and harmless curiosity or become completely distant. The dog is very pack oriented and if raised in a group, dominant and subordinate roles will be acted out under the leadership of a totally dominant or boss dog. Behaviour within a group or pack is usually well structured and controlled but it is not uncommon to see battle scars or torn ears on dogs originating from kennel areas where the dogs are raised in groups or packs. Compared to modern domestic breeds, the Canadian Eskimo Dog has almost over response to any stimulus whether it be food, work, fighting or play. For this reason, the dog should be a companion for adults and is not to be considered a child's pet. (2)

Though a primitive dog, the Canadian Eskimo Dog has had a long association with humans and is a gentle and affectionate companion. The breed can be overly responsive to any stimuli and are best suited to an adult household. In true northern fashion, they can be vocal at times. The breed does not adapt well to temperate climates.

These powerful dogs were born to pull and will go all day in harness. They need lots of outdoor exercise and revel in sub-freezing temperatures.

Normal brushing may suffice most of the year but when the Canadian Eskimo Dog drops his dense undercoat with the approach of warmer weather, it’s imperative to use a coat rake to keep him clear of mats that can quickly form. (1)

Now you know a little about the Canadian Eskimo Dog, you may have think that this is the dog for you. Before you make a decision, please make contact with the breed club or your State controlling body for purebred dogs. They will be able to give you information about available puppies and also suggest dog shows where you can see the breed and speak to breeders. In this way you will gain a better perspective of the Canadian Eskimo Dog and its needs and whether this breed would suit your lifestyle.