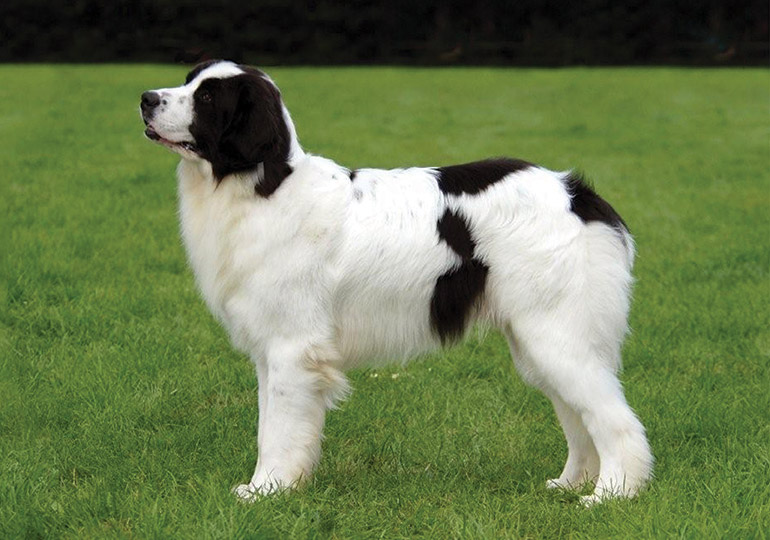 The history of the Landseer ECT and the Newfoundland is intertwined and somewhat controversial.

In the 1800s, these large dogs were brought over to England from Newfoundland, off the coast of Canada. The breed was orginally used to help the settlers fishing off the island, pulling the fishing nets through the sea and the boats through the surf.1.

The breed's profound talent and perseverance in the water, friendly nature and intelligence created a big demand for this intelligent helper at the fishing ports in England. Large dogs were also popular with the aristocracy at this time, for their majestic appearance. 1.

The breed, at this time, was largely white and black, or white and brown. 2.

The painter, Sir Edwin Landseer, England's most prominent animal artist of the time, immortalised several of the dogs in his paintings, the most well-known being "A Distinguished Member of the Humane Society.'

In the mid 1800s, possibly through the introduction of new blood from Canada, the black colouration was introduced and quickly became the dominant colour. Newfoundland breeder and former Naval surgeon, Dr William Gordon Stables, championed the black as the original colour, although this was incorrect. Dr Stables, in an 1875 interview said, that the white and black Newfoundland dog should be called the Landseer, since they were featured in Sir Edwin's paintings. 2.

In Europe, the original Landseer type first came to Holland and then Switzerland in the late 19th and early 20th centuries, where it was taken forward notably by Otto Walterspiel from Munich. the breed was heavily impacted by the first World War, but by 1933 the stud book was established, with the Landseer European Continental Type (ECT) officially recognised as a seperate breed to the newfoundland in 1960. 3.

A Landseer is a beautiful large breed with a noble appearance. The massive head is closely fitted with a wrinkle free scalp. Finer short hair covers the head. A Landseer has a broad skull and a short but strong muzzle that appears to be squared off. A Landseer has a black nose. The brown to dark brown medium sized eyes are almond shaped giving the dog a friendly expression. The medium sized ears are triangular in shape and have slightly rounded tips. Set on high ears are covered with fine short hair. Longer hair at the back of the base of the ears forms fringes. Ears are carried flat to the sides of the head. 5.

This breed has a broad muscular neck, a straight and level back, a muscular loin and a deep chest with well sprung ribs. The strong tail is densely covered with bushy hair. When the dog is at rest, the tail forms a slight curve at the end and hangs down. On the move, the tail is carried straight out with a slight curve at the end. This breed has a double coat. The topcoat is long, straight and soft to the touch. The slightly wavy topcoat is thick and oily. The thick undercoat is oily too. The predominantly white coat is marked with black patches on the body. The head is black and ears are black. A white blaze that runs from the muzzle to the collar enhances the impressive appearance of the dog. 5.

Main colour of coat is a clear white with distinct black patches on body and croup.
Collar, forechest, belly, legs and tail must be white. Head black, with white muzzle and white symmetrical blaze - neither too narrow, nor too wide - extending from muzzle over head to the white collar, being considered a definite breeding goal. 6.

In 1774, Oliver Goldsmith wrote in a description of breeds (A History of the Earth and Animated Nature): 'This dog is surely the most noble member of his species, provided he is pure bred and untouched from a mixture of other breeds. His huge size and strength, his majestic expression convey an impression od awe, even fear, but it disappears quickly once we recognise the placid composure, the soft expressive intelligence of his countenance. This proves that ferocity is not part of his nature. He is exceptionally teachable and nothing can surpass his devotion.' 1.

The Landseer is very much attached to his family and has a distinctive personality. He is only there for his family. He is self confident, loves cuddles and playing. With his family, he unfolds his good characteristics. 1.

Living in a kennel is totally inappropriate and will lead to loneliness and fading of his soul. Because of his beautiful coat, being outside is as important as his food. You should have a fenced in backyard, where he has a place to run and which he can defend. 1.

Although Landseer are heavy and strong dogs, their temperament is lively and they love to learn. For example, they love to hold the shopping basket in their mouth on the way home, especially if they get a treat afterwards. They learn very easily to pull a little wagon or sled. The whole being of a Landseer is to work for his family. He loves to run and is desperate for walks. And his ultimate pleasure is to swim and play in the water where, and whenever possible. The person who is prepared to take on a Landseer, with all consequences, couldn't ask for a better friend. 1.

The coat requires a good brush once a week, with a pin brush for the body and a comb for the feathering, tail and behind the ears.

Now you know a little about the Landseer (European Continental Type) and have decided this is the dog for you, or you would like more information, please make contact with the breed club or your State controlling body for purebred dogs. They will be able to give you information about available puppies and also suggest dog shows where you can see the breed and speak to breeders. In this way you will gain a better perspective of the Landseer (European Continental Type) and its needs and whether this breed would suit your lifestyle.