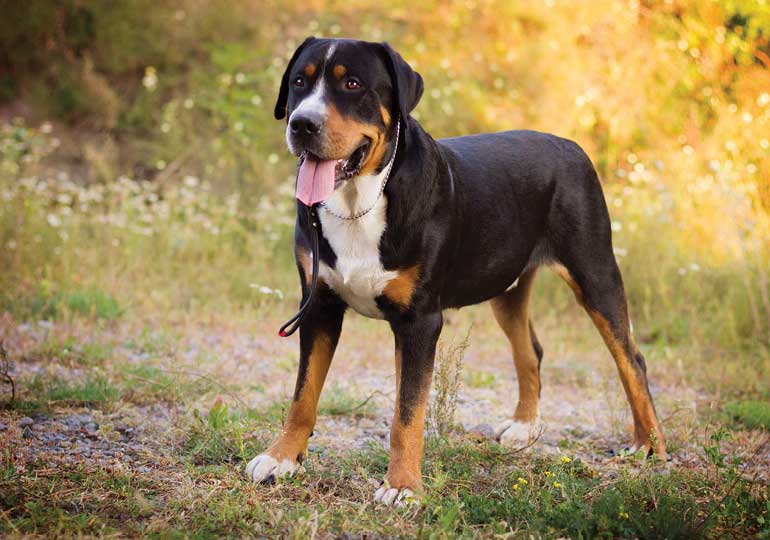 In 1908, at Langenthal, on the occasion of the jubilee show to mark 25 years of existence of the “Schweizerische Kynologische Gesellschaft” (Swiss Kennel Club) SKG, two short-haired Bernese Mountain Dogs were presented to the great promotor of the Swiss Mountain Dogs, Prof. Albert Heim. He recognised them to be representatives of the old, vanishing, large Mountain Dog or butcher’s dog, whose ancestors had in the past been widely spread across Europe, bred as guard, draught or droving cattle dogs. In 1909 they were recognised by the SKG as a separate breed being registered in volume 12 of the Swiss Stud Book. 1.

In 1912, the club for “Grosse Schweizer Sennenhunde” was founded in order to promote this breed and keep it purebred. The first standard was published by the FCI not before February 5th, 1939. Today these dogs are also bred in other European countries, they are especially appreciated as family dogs due to their calm, reliable temperament. 1.

A tricolour, sturdy, heavy boned and well-muscled dog. In spite of his size and weight, he presents endurance and agility. The difference between the sexes is distinctly obvious.

Ears are of medium size, triangular and set on fairly high. In repose hanging flat and close to the cheeks but raised forward when attentive. Well covered with hair, both inside and outside.

Coat is double coated, consisting of thick, outer hair of medium length and dense undercoat. The latter as dark grey or black as possible. Short outer coat permissible if there is undercoat.

Colour is typically tricolour. Main colour black with symmetrical, reddish-brown (tan) markings and clean white markings. The reddish-brown colour is situated between the black and the white markings on the cheeks, above the eyes, on the inside of the ears, on both sides of the forechest, on all four legs and underneath the tail. The white markings are on the head (blaze and muzzle), running down unbroken from the throat to the chest, also on the feet and the tip of the tail. Between the blaze and the reddish-brown markings above the eyes, a band of black should remain. A white patch on the neck or a white collar around the neck are tolerated.

Self-confident, alert, watchful and fearless in everyday situations. Good-natured and devoted towards people familiar to him. Self-assured with strangers. Medium temperament.

This is basically a 'wash and wear' breed, but they are double coated and do blow their undercoat, usually twice a year. When this is occurring they benefit from a good bath and blow-out, followed by a thorough brushing with a rake or shedding tool. For the rest of the year the occasional bath and brushing usually does the trick. They need regular nail-trims and ear and teeth cleaning. 2.

The Great Swiss Mountain Dog requires moderate exercise. A walk around the block or a romp in the woods generally will satisfy their daily exercise needs. This breed is much better suited for the person looking for a hiking companion than the person wanting a bicycling or marathon-running partner. 2.

This breed is very food motivated and responds well to training using food rewards. They can also have a stubborn streak, however, so their owners must be more determined than they are. It is not recommended to use any harness-type training device on this breed. They are a draft breed, and the use of a harness (other than for draft work) just tends to make them pull that much harder. As with all dogs, early socialisation and puppy training classes are recommended. 2.

The Great Swiss Mountain Dog does not have any breed-specific disorders but can have health problems that affect large-breed dogs. This can include orthopedic issues, although overall the breed's orthopedics tend to be very good for a large breed. Splenic torsion, unrelated to gastric torsion, occurs more often in this breed than in other breeds. Owners should be aware of the possibility of bloat and know the symptoms, and what to do should it occur. Urinary incontinence is fairly common in puppies and spayed bitches. 2.

The most serious issue with feeding the GSMD is overfeeding, which leads to many digestive problems, including loose stools, and also leads to obesity, which is one of the greatest health problems in the breed. 2.

Now you know a little about the Great Swiss Mountain Dog, you may think that this is the dog for you. Before you make a decision, please make contact with the breed club or your State controlling body for purebred dogs. They will be able to give you information about available puppies and also suggest dog shows, where you can see the breed and speak to breeders. In this way, you will gain perspective of the Great Swiss Mountain Dog and its needs and whether this breed would indeed suit your lifestyle.