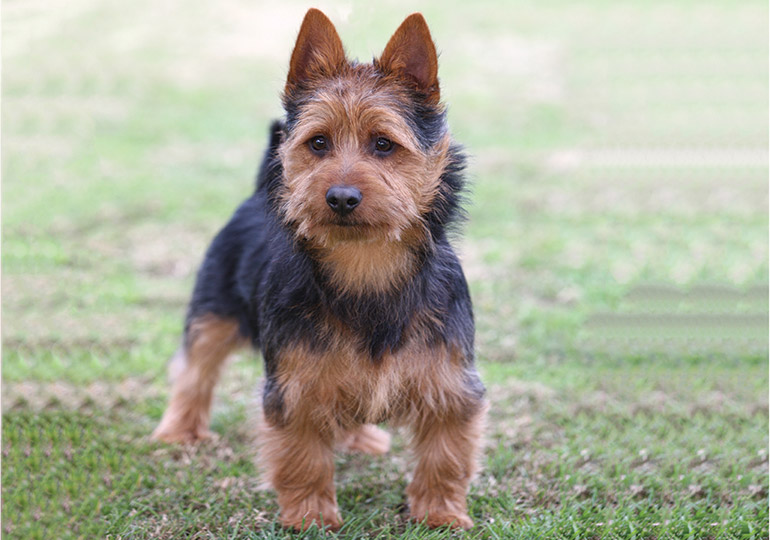 For hundreds of years, British Naval and merchant ships carried Terriers on board.

These little dogs appeared on no manifest, since they were neither paid nor fed – their job was to kill the rats that infested all ships, and their food was their kill. These Terriers came from all over the British Isles, and each was typical of the area it came from. Ancestors of the Skye (about a third of its modern size), the Scotch (not the modern Scottish and about half the modern size), and English Black and Tan (mostly only as big as the rats it hunted), and many more small Terriers all went to sea with the navy and the merchant vessels, long before there were any named breeds of Terriers.

When the First Fleet came to Australia, it brought with it not only convicts, soldiers, smallpox and sailors, but mice, rats and small Terriers. Early crops, better suited to an English rather than Australian environment, failed and the colonists were on the verge of starvation. At this time, the little Terriers were highly prized as they preyed on the vermin which feasted on food supplies.

The later colonies repeated this practice, valuing small dogs which didn’t need to eat the precious stores and which would kill not only vermin but the dreaded Australian snakes. It isn’t surprising then, given the drastically different environment they were now hunting in for survival, that the mixed Terriers evolved into a breed unique to this country and ideally suited to the country’s challenges.

These Terriers were small, not needing to eat very much, and could kill their own food. They were rough-coated (the bush was not kind to smooth-coated skins) and had a large ruff and apron to protect them from snake bite. They also had smooth, small feet, which could handle any terrain.

This breed bonded with children of families on large properties, where parents were often working far away for long periods and acted as effective watchdogs to warn of the approach of strangers to isolated homes. Later on, this would prove even more valuable on the goldfields, when many a claim was saved by the vigilance of the ‘Aussie’.

The first standard for the Australian Terrier was written in 1887 in Victoria, and even then the colour was determined to be ‘blue and tan’ (as it appears in the current ANKC breed standard), not black, sandy or red. The Aussie was then recognised as a breed in its own right, and began to be shown regularly among the ‘Rough Coated Terriers’. However, since bloodlines were fiercely protected, no one would release any of their information for publication of records.

Much crossbreeding of the variety of small Terriers that arrived on early ships had created the Aussie Terrier. Without being able to consult records, no one can know exactly what mix went into making up this great little dog. Appearance According to the ANKC breed definition, the Aussie is: “A sturdy low-set dog, rather long in proportion to height with strong Terrier character, alertness, activity and soundness.”

The ANKC standard mentions: “Its untrimmed, harsh coat with definite ruff around the neck extending to the breastbone and its long strong head assist in developing its hard-bitten, rugged appearance.”

A long silky topknot protects its eyes and pulling a comb through a few times a week keeps the coat free of loose hair. For the show ring, ensure that feet, tail and ears are free of long hair. The Terrier's coat, approximately 6cm long, is rough and weatherproof, with a dense undercoat in the winter - being an adaptable Ausiie, most of it is dropped in the summer.

Our Aussie is bright, alert, smart, quick to learn, outgoing, usually friendly to a fault and loving. It definitely needs a pack leader – in the absence of a human willing to take that role, the Aussie Terrier will not hesitate to become a leader. It is longer than it is tall – about 25cm at the shoulder.

Unlike most Terriers, the Aussie is not one to start a fight, but if someone else starts one, it does like to finish it.

As long as it can be with a person the Aussie Terrier is happy. Its loyalty and even disposition make it a very suitable companion dog.

A very basic little dog, it is relatively free of hereditary faults. As in all small breeds there is sometimes a degree of patella displacement, but hip problems, such as Legge Perthes disease, are now almost non-existent, as breeders since the 1970s have worked very hard to eliminate this. Aussie Terriers now live happily all over the world, whether on a farm or in a city apartment. They preform well in both the obedience and agility rings – in fact, they generally love to participate in any activity that gives them a chance to bond with a human.

Colour Blue, steel blue or dark grey blue, with rich tan (not sandy) on face, ears, underbody, lower legs and feet and around the vent (puppies excepted). The richer the colour and more clearly deﬁned the better. Smuttiness is objectionable. Topknot blue, silver or a lighter shade than head colour. Clear sandy or red. The topknot of a similar or lighter shade. Any dark shadings or smuttiness undesirable. In any colour, white markings on chest or feet must be penalised Size Height: dogs approximately 25 cm at the withers, bitches slightly less.

Weight: dogs approximately 6.5 kg, bitches slightly less. Gait The action to be free, true, springy and forceful. When viewed from the front, the forelegs should move truly without looseness of shoulder, elbows or pasterns. The hindquarters to have drive and power, with free movement of stiﬂes and hocks. Viewed from the rear, the legs from the hocks to the ground should be parallel, neither too close nor too wide.

Now you know a little about the Australian Terrier, you may think that this is the dog for you. Before you make a decision, please make contact with the breed club or your State controlling body for purebred dogs. They will be able to give you information about available puppies and also suggest dog shows where you can see the breed and speak to breeders. In this way you will gain a better perspective of the Australian Terrier and its needs, and whether this breed would suit your lifestyle.