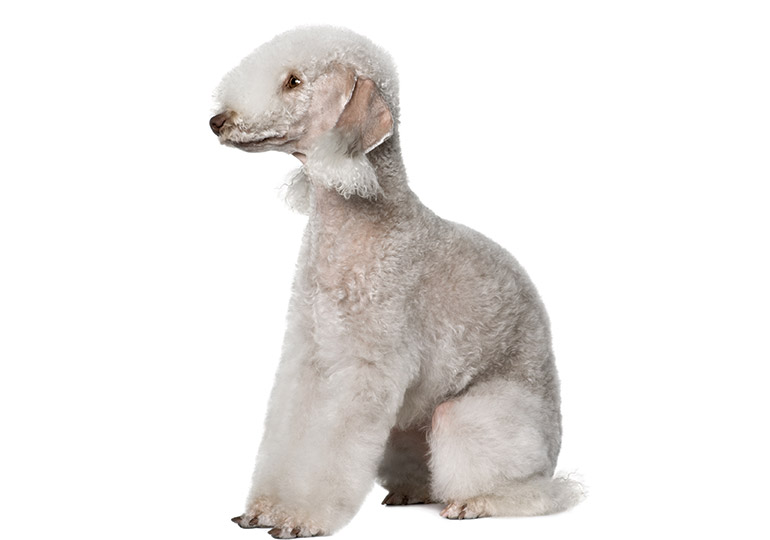 Early dog fanciers in Britain selectively bred for the type of dog that best suited their needs. Although the background of the Bedlington Terrier is somewhat obscure, British breed historians now believe the long-legged dog evolved from the Rough Coated Scotch Terrier.

The Bedlington Terrier is named after its town of origin, Bedlington, Northumberland in North East England. It became a favourite with miners because of its ratting ability, a skill that is still evident in the breed today.

Well tempered, affectionate and dignified, the Bedlington Terrier is not shy or nervous in nature. It may be mild in repose, but full of courage when roused.

A graceful, muscular dog, the Bedlington Terrier shows no sign of weakness or coarseness. Its head is pear- or wedge-shaped and it wears a mild, gentle expression. The pear-shaped head, profuse silky top-knot, filbert-shaped ears with tassels or fringes, horseshoe front assembly, linty coat and mincing gait are some of the distinctive features of the breed. The outline should present as a series of graceful curves from the tip of the nose to the end of tail.

Part of this breed’s appeal as a pet is the lack of odour and fur. Its coat doesn’t shed, making the Bedlington Terrier an ideal choice for the house proud or those who don’t want dog hair all over their clothes. However, this means the breed does require regular grooming once a week, with a soft wire slicker brush to remove any knots or tangles. The non-shedding coat also requires clipping every six to eight weeks for standard maintenance. Be careful not to over-wash the coat, or the wool will become lank.

The one major health concern in the breed is the genetic disease, Copper Toxicosis, detected by DNA testing. Affected dogs store toxic levels of copper, mainly in their livers. Responsible breeders began addressing this problem in 1994 and embarked on a breeding program to eliminate the disease. ANKC regulations require that breeding stock is DNA tested before a litter can be registered.

Bedlington Terriers tend to go with the flow. The breed picks up on the mood of its environment and adjusts its behaviour accordingly. This versatility makes the Bedlington Terrier a suitable pet for apartment dwellers, families in a large suburban home, or farmers with extensive fields for the breed to gallop in.

Now you know a little about the Bedlington Terrier, you may think that this is the dog for you. Before you make a decision, please make contact with the breed club or your State controlling body for purebred dogs. They will be able to give you information about available puppies and also suggest dog shows where you can see the breed and speak to breeders. In this way you will gain a better perspective of the Bedlington Terrier and its needs, and whether this breed would suit your lifestyle.