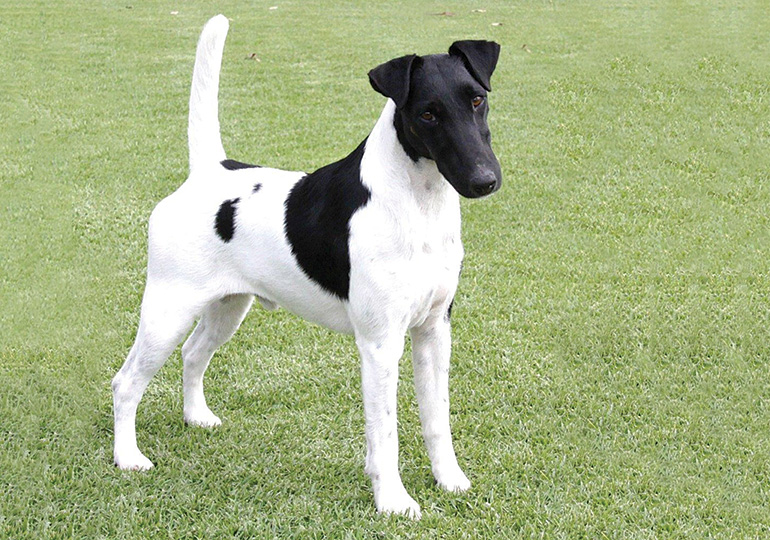 'Terrier' is derived from the Latin terra, meaning earth- this is a dog that eagerly goes to ground. The prefix ‘Fox’ shows that these dogs are especially suited to hunting out foxes. They were used for hunting both foxes and badgers, following them into the earth and hunting them out.

In the early 19th century, Fox Terriers would have been chosen for their character or type. It was common practice to use the animals best suited to the job, and many attempts were made to improve the breed. These attempts resulted in some modifications, but the work the dog had to do remained the same.

“The first smooth haired Fox Terrier to arrive in Australia was brought to Sydney from England in 1868 by Mr Leonard Fosbery. She was an all white bitch named “Careless.”

“In 1876 Mr G Yeo imported the first wire haired Fox Terrier from England, an all white bitch with a tan ear and eye patch called “Nell.” The wire haired breed never took on to any great extent for many years. “1.

By 1886, Fox Terriers had found their way to Australia and were exhibited in Centennial Park that year. It was another 24 years before the Fox Terrier Club of NSW was formed in 1910; and the Club, still going strong today, celebrated its centenary year in 2010.

Although bred as a working Terrier, the Fox Terrier is a composite of balance and symmetry. Standing like a cleverly made short backed hunter, they are neither leggy nor too short in the leg, giving them the speed that was required of them, to cover a lot of ground. About 15 inches in height at the withers, narrow in chest, skull flat, moderately narrow, gradually decreasing in width to eyes.

A little ‘stop’ apparent, cheeks never full, jaws, upper and lower, strong and muscular, falling away only slightly below eyes. This portion of the foreface moderately chiselled out, so as not to go down in a straight line like a wedge. Nose is black, the eyes dark and moderately small, as near as possible, circular in shape. The ears should be small, V-shaped and dropping forward close to cheek.

“The only difference between the wire haired variety and the smooth is in the coat and furnishings-structurally they are the same as the smooth. The wire coat can be skillfully prepared to advantage to present the ideal outline. The desired ‘wire’ coat needs to be hard, dense, close, abundant, of a wiry texture, like coir matting, as near straight as possible, but quite definitely broken in appearance without being shaggy, the harder and more wiry to the touch the better.”

Wire Fox Terriers are predominantly white, with black, tan or black and tan markings. The coat is dense and very wiry with a softer undercoat. With correct grooming it is shorter on the shoulders and longer at the withers, back, ribs and hindquarters.” 2.

The temperament of the Fox Terrier is of vital importance. It is friendly, fearless and forthcoming, and is known as the gentleman of the Terriers.

Several years ago there was some patella problems. Responsible breeders are working to ensure this problem is kept under control. Fox Terriers live to approximately 15 years of age and have very few health problems.

Very affectionate and protective, Fox Terriers are suited to farm work or backyards. They take their place in all family activities, and are happy to relax inside with their owners. The Fox Terrier will also appeal to the man of the house and makes an excellent children’s playmate.

Both Wire and Smooth Fox Terriers enjoy regular brushing and a bath when required, however the Wire’s coat needs ‘stripping out’. It is best to seek advice from your breeder or a reputable groomer on how to best strip the Wire’s coat.

1. and 2. Excerpts taken from ‘The Fox Terrier’ by William R. (Bill) Polley OAM

Now you know a little about the Fox Terrier (Smooth), you may think that this is the dog for you. Before you make a decision, please make contact with the breed club or your State controlling body for purebred dogs. They will be able to give you information about available puppies and also suggest dog shows where you can see the breed and speak to breeders. In this way you will gain a better perspective of the Fox Terrier (Smooth) and its needs and whether this breed would indeed suit your lifestyle.