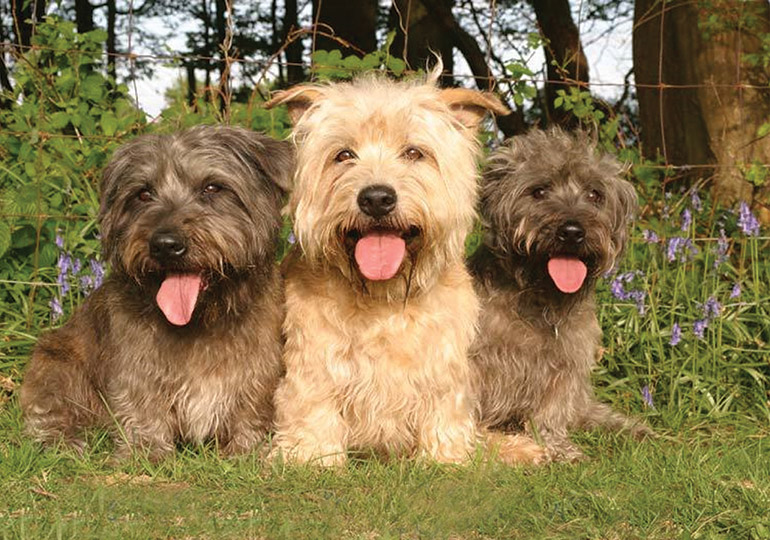 The breed originates in, and is named for, the Glen of Imaal in County Wicklow, Ireland. (2)

Reportedly, the Glen's history began during the reign of Elizabeth I, who hired French and Hessian mercenaries to put down a rebellion in Ireland. After the conflict, many of these soldiers settled in the Wicklow area. They brought with them their low-slung hounds, which they bred with the local terrier stock, eventually developing a distinctive breed that became known as the Glen of Imaal Terrier. (2)

Glens were originally used for eradicating other animals such as rat, fox, badger, and otter, and also as a general-purpose farm dog for herding and family companionship. Unlike many other terriers, they are "strong dogs" rather than "sounders"—they were bred to work mute to ground, going silently into dens after their quarry rather than barking at it to alert their handlers. (2)

Medium sized with medium length coat, great strength with impression of maximum substance for the size of dog. Body longer than high. (1)

Glen of Imaal Terriers can be energetic and tenacious, but they tend to be more even-tempered, more easygoing, and less vocal than most other terriers. While they love activity, they are not demanding, and are happy to relax by their owner's side. (2)

Their bark is deep and authoritative, like that of a much larger dog, and they are said to be good watch dogs. (2)

As terriers, Glens can have a stubborn streak, but they respond well to a firm hand and can withstand correction when necessary. They are intelligent, learn quickly, and socialise easily. They are typically fearless and loyal, and are superb with people, including children. However, some can be dog-aggressive, especially when provoked. (2)

By maturity, most Glens develop a robust prey drive and will readily go for vermin such as rats, so they need to be well-socialized with other animals when young—particularly with small household pets that they might mistake for quarry, such as cats and rabbits. (2)

Glens often do well at Earthdog trials, Barn Hunt, and in agility. Although not typically strong swimmers due to their short legs and dense body, some Glens can work in water, and others have been trained to herd and drive sheep and cattle. (2)

Now you know a little about the Glen of Imaal Terrier you may think that this is the dog for you. Before you make a decision, please make contact with the breed club or your State controlling body for purebred dogs. They will be able to give you information about available puppies and also suggest dog shows where you can see the breed and speak to breeders. In this way you will gain a better perspective of the Glen of Imaal Terrier and its needs, and whether this breed would suit your lifestyle.