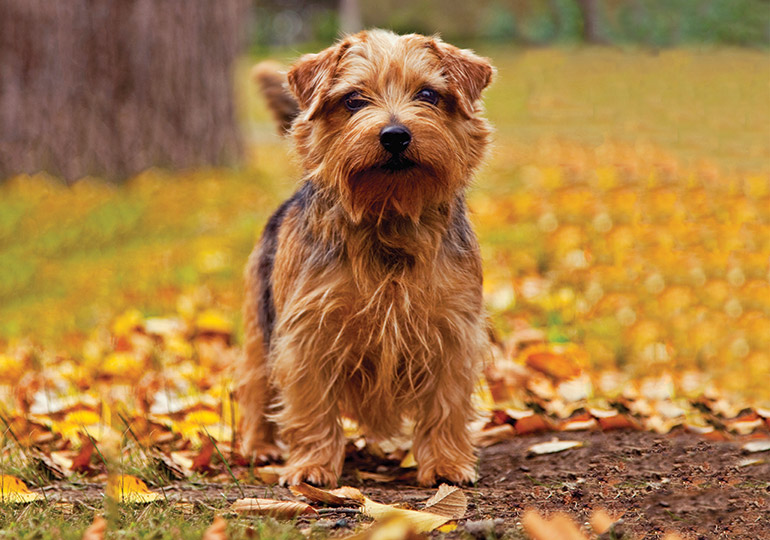 The Norfolk Terrier originated in the ﬂat agricultural counties of East Anglia in England. It was bred for ratting and to accompany the hunt. The breed was not expected to follow on foot, but was carried by huntsmen in wicker baskets. Much of its work was in agricultural drains which, being larger and straighter than the average earth, presented less of a problem to the Terrier due to the breed’s make and shape.

The Norfolk Terrier is described as a small, low, keen dog with a hardy constitution. It is alert and fearless with a lovable disposition, not quarrelsome. The breed’s skull is wide and slightly rounded with good width between the ears, which should be dropped forward, lying close to the cheek. The Norfolk Terrier’s eyes are oval shaped and its body should be sturdy with good bone and substance.

It’s short in back from the withers to the set on of tail, but reasonably long from the point of shoulder. The breed’s hindlegs are strong and muscular with well-turned stiﬂe and low-set hocks, giving good powers of propulsion. Its coat should be hard, wiry and straight, lying closer to the body. In terms of colour, all shades of red from wheaten through to deep red, black and tan and grizzle are acceptable.

If you have a garden, you will need to ensure it’s securely fenced, as the breed is naturally inquisitive and likes to explore.

The Norfolk Terrier has very few health issues. While reports have been collated on heart issues overseas, it has not become a major issue in Australia. Cataracts can develop in older dogs, but juvenile cataracts are rare. The breed’s average life span is 14-16 years. Overall the Norfolk Terrier is a sturdy, sound, little dog and has been described as having a big heart in a small package.

While regular grooming is needed to maintain the breed’s weatherproof coat, excessive clipping is not desirable. The Norfolk Terrier’s nails need to be kept short and its teeth clean. The breed makes for a good family companion and is especially good with children. It is, however, important to remember what the Norfolk Terrier was bred for: it is not a lap dog and requires regular and varied exercise. The breed also gets on well with cats, especially if it grows up alongside them.

Now you know a little about the Norfolk Terrier, you may think that this is the dog for you. Before you make a decision, please make contact with the breed club or your State controlling body for purebred dogs. They will be able to give you information about available puppies and also suggest dog shows where you can see the breed and speak to breeders. In this way you will gain a better perspective of the Norfolk Terrier and its needs, and whether this breed would suit your lifestyle.