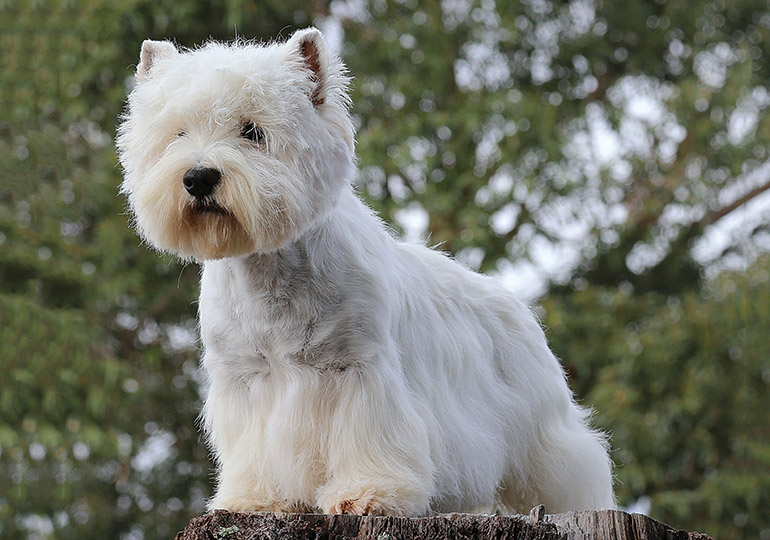 The West Highland White Terrier, or 'Westie', was originally from Argyllshire in Scotland. Colonel Edward Donald Malcolm, who is considered  the founder of the breed, wanted to develop a breed of terrier to hunt foxes in t he rocky terrain of the Highlands of Scotland. The dog needed to be small, but hardy and flexible. It also needed to be brave enough to fight its way into a fox's lair between the rocks, against stiff opposition if necessary.

The terriers were selectively bred as all-white terriers, so that the dogs  could be easily distinguished from the fox against the drab background of the countryside. It is thought that many reddish-brown terriers were shot when  mistaken for foxes. The breed was originally named the Poltalloch Terrier,  as Colonel Malcolm's family seat was 'Poltalloch', after the family seat of  the Duke of Argyle. Later the breed's name was aptly changed to the West Highland White Terrier.

A very hardy and outgoing dog, the Westie just loves being with its family. It is inquisitive, nosy and can be mischievous, but responds well to regular and persistent training. Just don't let it think it is the boss! It is generally a very alert, courageous, self-reliant, but friendly breed.

As its name suggests, the Westie only comes in one colour - white. It is neat and compact in appearance, with piercing black eyes and nose. The head is slightly domed, and the tail comes off the end of the spine and points straight up. It is a double-coated breed with a coat that is approximately five centimetres long.

Its coat should be regularly hand-stripped to ensure it stays a 'hard coat', shown in Conformation. Do not bath this breed too often, as it tends to soften the coat. Regular brushing of the coat helps to keep it clean. A pet Westie may be clipped and regular brushing will encourage natural oils to maintain the coat.

This breed can be prone to legge-perthes disease, where a decreased blood supply causes damage to the femur. Fortunately, with careful breeding and breeders importing new blood lines, this problem appears to be on its way out.

The Westie is susceptible to skin problems, which can have many causes. This needs to be investigated by your vet and sometimes a change in diet can help. Medication is sometimes required.

The Westie is a fun-loving terrier that fits in with most families very easily and particularly loves children, but it won't tolerate any nonsense.

Although it is a constant loving companion, the Westie still needs exercise and stimulation and needs to be entertained with games or toys .

Now you know a little about the West Highland White Terrier, you may think that this is the dog for you. Before you make a decision, please make contact with the breed club or your State controlling body for purebred dogs. They will be able to give you information about available puppies and also suggest dog shows where you can see the breed and speak to breeders. In this way you will gain a better perspective of the West Highland White Terrier and its needs, and whether this breed would suit your lifestyle.